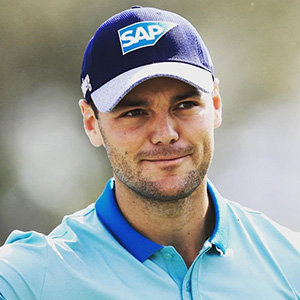 Once the World no. 1 and with two major trophies to his name, he looked destined to become Germany's legend, but now he appears to be the shadow of the former self. Martin Kaymer is a German golfer and is former world no. 1.

He was named as the number one golfer for eight consecutive weeks in the Official World Golf Ranking in the year 2011. The current world no. 119 slummed out of Open Championship in July 2018. The German ace is more in the news with his dating affairs these with TV beauty Melanie Skyes.

Martin Kaymer is reportedly dating TV Presenter Melanie Sykes for the past three years. The lovebirds were spotted time and again in the exotic beaches of Abu Dhabi in June 2018.

Martin shared a picture of himself on his Instagram account during his Abu Dhabi tour of HSBC Championship. Meanwhile, Melanie also shared her bikini shots clicked in Dubai during the same time, on her social media. Co-incidence! Not really because they also had a vacation in 2015.

The romantic buddies were previously holidaying in the same place where Martin took part in the 2015 Omega Dubai Desert Classic. Later the same following year in June, they were on a vacay in Mallorca, Spain and posted different solo pictures at different intervals of time.

His girlfriend’s colleague had also reportedly stated on The Sun Magazine in 2018 that both of them are pretty relaxed about everyone knowing about their affairs.

The German reportedly had an affair with a lady named Jenny back in 2008. He also dated Allison Micheletti, the daughter of the legendary NHL Player Joe Micheletti. Martin and his then-girlfriend loved playing golf, and their relationship ended in 2012 after dating for almost a year and a half.

Following the separation, his ex-girlfriend, Allison got married to NHL Player, Mike Modana in September 2013.

He also dated TV host Kirsty Gallacher, the daughter of the former Ryder Cup captain, Bernard Gallacher back in 2014. Kirsty's cousin introduced the pair, Stephen was Kaymer’s golf mate. Kirsty is the former wife of a rugby player, Paul Sampson.

Martin's mother, Rina Kaymer lost her battle after being diagnosed with skin cancer in 2008. The golfer paid a tribute after winning 2014 Players Championship to honor his late mom on the occasion of Mother’s Day. The golf player always plays with a sunflower on his bag, which is the favorite flower of his mother.

Martin has also honored his dad, Horst Kaymer, a retired corporate executive on Father’s Day in 2014. Martin along with his brother, Philip was trained by their father to prepare them for the rigorous golf play tournaments.

How Much Is Martin Kaymer’s Net Worth?

The 33-year-old has accumulated a tremendous net worth of $22 million from his professional golfing career since 2005. For more than a decade, Martin is making infectious pay receipts playing in the golf field.

Martin made a remunerative figure of €26,664 by winning the 2006 Pro Golf Tour. He earned €754,691 for the 2007 season and topped the tour, finishing as the highest-ranked rookie and received the Sir Henry Cotton Rookie of the Year Award. Born on 28 December 1984, Martin Kaymer was raised in Dusseldorf as per wiki. The player stands at the height of 1.85 m (6’) and belongs to a Caucasian ethnicity. His birth sign is Capricorn.