The American tennis star left her thousands of fans shocked after she announced her retirement. Melanie Oudin retired on August 18, 2017, leaving behind her sensational career in the history of sports. She was previously a world junior No. 2 and had been the winner of the 2011 US Open mixed doubles title with her fellow American player, Jack Sock. She also received the WTA Award for Newcomer of the year in 2009.

Melanie Oudin started playing tennis at the age of seven alongside her sister, Katherine. At the age of seventeen, she reached the round 16 of the Wimbledon Championships followed by quarter-final at the US Open. The tennis player achieved a career-high ranking of world No. 31 on April 19, 2010.

She turned a professional in 2008 and the same year received a wildcard entry at the WTA tournament in Miami where she lost to Tathiana Garbin. She was invited to play at the 2011 Hong Kong Tennis Classic with compatriots Venus Williams and John McEnroe.

In 2012, the tennis star competed with Laura Robson at 2012 Australian Open and also played on the ITF tour in 2016. She also played in the United States Fed Cup tie against Argentina in 2009.

How much is Melanie Oudin’s Net Worth?

The Award-winning tennis player, Oudin has appeared in various international tournaments. She has competed in the US Open, WTA, United States Fed Cup which have prominently helped in adding up her earnings. Her wiki source suggests that she received $1.5 million as prize money and enjoys a significant net worth of $2 million.

Sharing a Beautiful relationship with Boyfriend!

If not everyone, the followers on her Instagram account evidently know that Melanie has fallen head over heels in love with her boyfriend, Tim Wakely.

Her posts suggest that Melanie is familiar with Tim’s families and often visits them on occasions. On June 6, 2017, Melanie shared the glimpse from the celebration organized in the memory of Tim’s grandfather, Norman Wakely. Caption: Melanie and Tim Wakely attending the celebration organized in memory of his grandfather.
Source: Instagram

The sportswoman hasn’t announced the dates of their dating affairs, but it’s apparent that they are more than happy for having one another in life.

Melania and her sports enthusiast boyfriend recently went to watch a baseball match where they radiated great love and affection for one another. 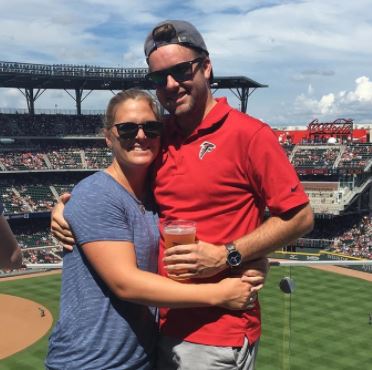 Since the couple seems so serious taking the relationship, the audience is super excited to see them weaving in a marital bond.

The American tennis player aged 25 was born on September 1991 in Georgia, United States. Speaking of her family, she was born to Leslie Oudin and has a twin sister, Katherine and a younger sister, Christina Oudin. The tennis star belongs to the white ethnicity and holds the American nationality.