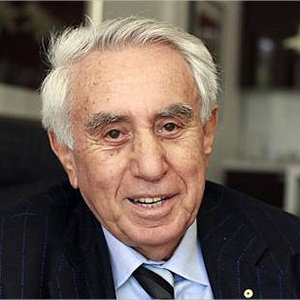 The Republic of China-born and real estate developer, Harry Triguboff started his journey as a house-buyer entering the market of Sydney. The former taxi fleet owner flourished his real estate business after moving to Australia and became one of the Australian billionaires.

He is the Managing Director of the country's biggest residential home builder, Meriton. Initially, he built 18 apartments, but now the company has about 75,000 apartments across the eastern states equating the estimated 0.05 percentage of Australia’s GDP.

What Is Harry Triguboff's Net Worth?

Australian billionaire Harry, 85, garners the net worth of $6 billion from his career as a real estate developer. He is one of Australia's wealthiest people who secured #2 spot in 2015 with assets worth $11.43 billion. Most of his income source consists from his stint in the Meriton property development that dominated the industry of Sydney.

In 2016, Meriton sold apartments worth $1.2 billion and Harry grew his duties increasing the price of rentals to almost $120 million within a year.

You May Like: Todd McKenney Partner, Husband, Daughter, Sister, Net Worth

Harry first bought a 643-square-meter block in Roseville for £4025. The White Family bought the brick-house on Arrunga Avenue for a price of $34,250 in 1969. Harry bought Tempe land in 1963 and developed it into eight apartments and two years later in Meriton Street, Gladesville building 18 flats.

That was the inauguration to start his company Meriton which got its name from the first solo property development in Gladsville. His company flourished over the course in Sydney and also build the tallest residential towers in Brisbane, Sydney, and the Gold Coast.

Harry Triguboff took Rhonda Triguboff as his second wife in 1980. When he planned to build a 61-story building at Broadbeach on the Gold Coast in 2016, his wife Rhonda opposed the ideas telling him that the 'tower would look horrible.'

According to her interview with Gold Coast Bulletin, the wife of Australian billionaire revealed that she told her husband that she wouldn't go to the Golden Coast if he build the apartment and he would have to sell their penthouse at Main Beach.

Following her stand, he has now dropped the idea to build the skyscraper. The duo now resides in Sydney managing the residential construction industry. Harry Triguboff's wife Rhonda Triguboff told him not to build a 61-story building at Broadbeach on the Gold Coast in 2016 (Photo: dailymail.co.uk)

The Managing Director of Meriton shares two children Orna Triguboff and Sharon Triguboff from his previous marriage. He has two grandsons Daniel Hendler, and Ariel Hendler with his daughter Sharon and Orna is his older daughter.

Some of the interesting facts you don't want to miss about Australian billionaire Harry Triguboff:

Born as Harry Oskar Triguboff AO on 3 March 1933, Harry is a native of Dalian, Liaoning, Republic of China. The managing director of Meriton grew up in a Jewish community in Tianjin and moved to Australia at the age of 14. The real estate developer then studied at the Scots College in Sydney.

After spending time in Australia, Harry moved to England where he graduated with a degree in textiles from the University of Leeds. He then worked flourishing his textile business in South Africa and Isreal. In 1960, the Australian billionaire returned to Australia, and a year later, he became an official citizen.