Successful business people have many attributes in common with one another as they are confident and optimistic. And Patrick Bet-David is one of them who is the perfect example of the above phrase as he is one of the most successful entrepreneurs who not only climbs the summit of success but also inspires many who dreams to achieve something very huge.

Successful business people have many attributes in common with one another as they are confident and optimistic. And Patrick Bet-David is one of them who is the perfect example of the above phrase as he is one of the most successful entrepreneurs who not only climbs the summit of success but also inspires many who dreams to achieve something very huge.

Patrick Bet-David was just 12 years of age when he fled to the United States in 1990. Prior that, he along with his father and mother lived at a German refugee camp for two years before the US official granted them the American citizenship.

After completing high school from the States, Patrick joined the US Army with the 101st Airborne Division before starting his entrepreneurial career with Morgan Stanley Dean Witter. Later, he established his own company named, PHP Agency Inc. The company is operated to provide an insurance marketing place for the people and business firms. Today, PHP is one of the global and fastest growing companies in the financial marketplace.

Partick also owns Valuetainment Media LLC and runs a YouTube channel under that name where he posts various motivational videos which inspires the aspiring entrepreneurs.

The 39-year-old entrepreneur is very vocal about his opinion that necessarily does not always have to be about business enterprises. Patrick loves sharing his perspective on different issues of the world that includes politics and religion. And in one of his tweets back on August 3, 2016, he is seen preaching the quote of Great Mahatma Gandhi which states,

Those who say religion has nothing to do with politics do not know what religion is. Gandhi

How Much Is Patrick Bet-David's Net Worth?

Patrick is a guru who provides basic formulas and successive tips for new aspiring entrepreneurs. He has also conducted many live sessions for the people who want to expand their startups from his own YouTube channel titled, 'Valuetainment.' Similarly, he created quite a buzz from his 90-second video titled, ‘The Life of An Entrepreneur’ all across the globe with more than 27 million views.

Today, Patrick is living his childhood dream of being a millionaire. He owns a net worth of $70 Million and probably resides in the most lavish house across the States. From all his remunerative salary, the business magnate is the proud owner of a variety of super luxurious cars that ranges from Ferrari to Lamborgini, and the person is not hesitant in flaunting his daily lifestyle. 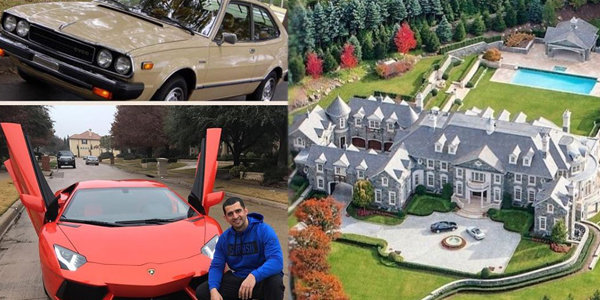 Patrick's car collection and the picture of the luxurious house that he shared on Instagram (Photo: Instagram)

When you have tremendous spousal support, achieving greatness will slowly fall into place for any individual professionally or personally. And Patrick himself is an exemplary since he has got immense support from his wife, Jennifer Bet David with whom he is blessed with three adorable children.

The couple has always confined the information of their marriage, but some of the romantic post shared by Patrick is pretty evident that they are a happy couple.