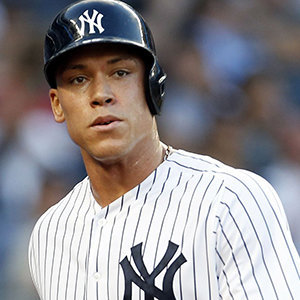 For the past few years, Baseball Player Aaron Judge has been making headlines. The California native currently plays as an outfielder for the New York Yankees, who was first drafted in the year 2013.

From an early age, Aaron was tipped off to be a future star in baseball. Despite the efficiency, his career came to an abrupt stop in 2013 after he suffered from an injury which resulted in a tear of his quadriceps femoris muscles.

But, after recovering from his injury, he made his professional debut in 2014 starting in the Class A South Atlantic League for the Charleston Riverdogs.

Is Aaron Judge In A Relationship With Girlfriend?

A prominent figure in the field of baseball, Judge, has a large number of fan followings. His performances have already cemented his name as a star. So it could be no surprise to see girls falling head over heels for Aaron Judge.

Dwelving into Aaron's personal life, he has been involved in a relationship with few ladies. There were rumors in August 2018 about him getting back with his ex-girlfriend Jen Flaum, whom he dated in 2017. As per New York Post, the couple was spotted in a restaurant having a nice dinner. Aaron Judge spotted in a restaurant with his ex-girlfriend Jen Flaum. (Photo: nypost.com)

Aaron didn't confirm the speculations of their reunion.

Apart from Jen, Aaron was in a relationship with Samantha Bracksieck. The couple, who dated a few years back, recently was spotted together at a Superbowl in February 2019, as affirmed by SportsGossip.com. Tha estranged couple has been supposed to be getting along. But, yet neither of the couples has confirmed nor have been denied the fact about their reunion.

A Look Into Aaron’s Net Worth

When it comes to Aaron Judge’s net worth, his superstar personality is sure to have earned him a huge chunk of money. As per the regulations of the MLB’s Collective Bargaining Agreement, players with less than three years of full-service time in a team have their salary determined by the team.

Aaron has been garnering the revenue from the New York Yankees since 2016. As of now, the player has a salary of $68400, which is 11 times higher than the average household income in the US.

Aaron Judge was born in 1992 in California, USA and his birthday falls on 26 April. However, on his second day of birth, he was adopted by his now parents Patty and Wayne Judge. Aaron has an older brother, who was also adopted by his parents.

He has never met his biological parents and considers his adoptive parents as his only ones. He maintains an excellent relationship with his mom and dad and credits them primarily for making him the person he is today.

Being born in America, Judge holds American nationality and is of the African-American ethnicity. He stands tall at the height of 6’7”.