Adrianne Palicki has stormed the internet about her affair with  Party of Five's Actor after she was spotted with actor holding hand-in-hand together. Adrianne Palicki is famous for her portrayal as Tyra Collette on the NBC series Friday Night Lights. She also had recurring roles in the movies Red Dawn and Legion. The Toledo-born-actress Adrianne was also a runner-up for homecoming queen in high school. She recently alerted gossip columns after she was spotted hand in hand with her co-star, Scott Grimes.

Adrianne Palicki has stormed the internet about her estranged relationship with Party of Five's Actor. She was first spotted with actor holding hand-in-hand together. Adrianne Palicki is famous for her portrayal as Tyra Collette on the NBC series Friday Night Lights.

She also had recurring roles in the movies Red Dawn and Legion. The Toledo-born-actress Adrianne was also a runner-up for homecoming queen in high school. She had alerted gossip columns after she was spotted hand in hand with her co-star, Scott Grimes.

Adrianne Palicki and Party of Five's Actor Scott Grimes became the talk of the town when two were spotted holding hands in the Comic-Con party on Saturday night on 21 July 2018. The Orville stars were secretly dating each other at the time as they posed for the camera but didn't let go of their hands.

She and Scott attended Entertainment Weekly's Comic-Con party at Float in the Hard Rock Hotel in San Diego. The couple were seen at the party and were holding one another's hand till the end of a party. Scott and Adrianne also flashed with a smile on the cameras at the event. 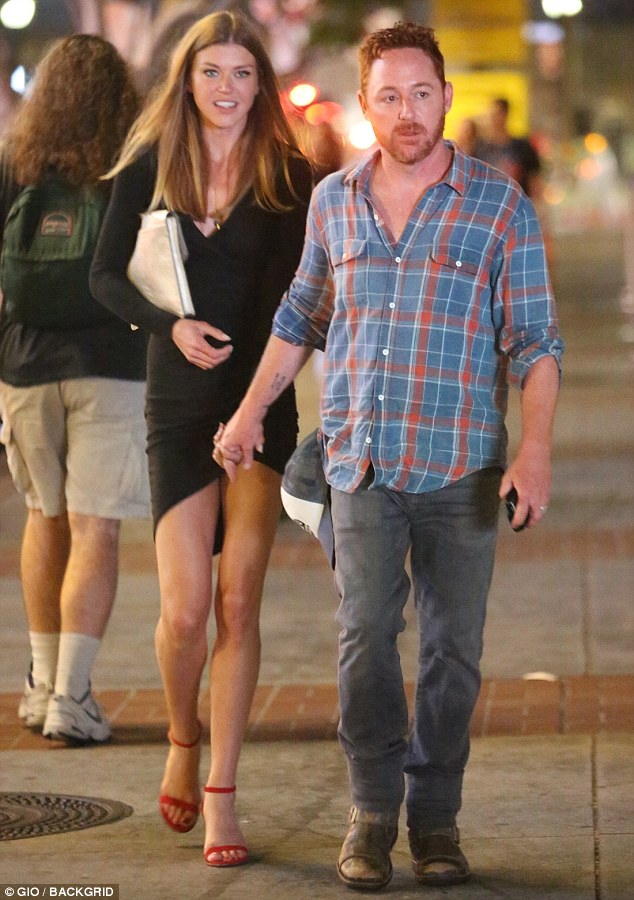 The couple has been co-starring in the TV series, The Orville since 2017.

Read About Recently Married: Who is Virginia Williams? All You Need To Know About Pusha T's Wife

Keeping things secretive for a long time, it was disclosed that Adrianne and Scott started dating in 2018. Later, they thrilled their fans with the announcement of their engagement in January of 2019.

Four months after their engagement, the pair got married in a romantic Austin, Texas ceremony on 19 May 2019. The twosome exchanged the vows in front of their close friends and family. One of their guests, American actress Ming-Na Wen shared some pictures of their beautiful ceremony where the pair walked down the aisle. Ming-Na even had congratulated them and felt lucky to have them as her friend.

But in an unfortunate turn of events, Adrianne and her then-husband Scott could not savour their bond and called it quits just after two months of their marriage. The Toledo-born-actress filed for divorce in July of 2019 in Los Angeles. However, in the court documents, there was no mention of the grounds for their divorce.

Just a few weeks before a divorce, they were seen together spending a weekend at San Diego Comic-Con, though they sat separately. Adrianne even had shared a selfie of them at the show panel from her social media handle.

Before Scott Grimes, Adrianne Palicki also was involved in a relationship with Jackson Spidell.

She, who was engaged with her boyfriend, a stuntman, Jackson Spidell, called off her relationship. She revealed about her separation from her fiancé, Jackson to ET's Katie Krause during an FB Live interview on Friday on 10 February 2017.

In the interview, Adrianne revealed that she and her then-boyfriend Jackson were no longer engaged and getting married is off the table. She also admitted that the couple ended their engagement after a year in 2015. Explaining with ET's Katie Krause, she told that there was some major issue in their affair and she even ignored it. In addition to the reason for the break-up, she said;

"[I] realized only a couple months before the wedding that sometimes people aren't meant to be together and it's OK to walk away."

Back then Adrianne said that she was single till that day and was focusing on her career. Adrianne Palicki and her then-fiancé  Jackson at RivaBella in West Hollywood on January 2014. (Photo: dailymail.co.uk)

Adrianne met her then-boyfriend, Jackson on the set of the movie, John Wick in early 2014 and started dating shortly. Later, The Friday Night Lights actress accepted a proposal from Jackson and got engaged on 10 September 2014.

Adrianne Palicki has accumulated the net worth of $4 Million. She gathered the prominent part of net worth from her career as an actress. She collected the revenue, appearing in G.I. Joe: Retaliation, which had a box office collection of $375.7 million from the budget $155 million.

The 36-year-old actress Adrianne stepped into Hollywood in 2003 and had acted in numerous TV series and movies. Adrianne was even nominated for the Saturn Award for Best Actress on Television for portraying the role of Commander Kelly Grayson in the TV Series, The Orville.

As of now, Adrianne is starring in the role of Commander Kelly Grayson in the Fox show, The Orville.

Adrianne Palicki, whose nickname is Annie, was born as Adrianne Lee Palicki on 6 May 1983 in Toledo, Ohio. She grew up with her parents, Nancy and Jeffrey, along with her older brother, Eric. Adrianne stands at the height of 5' 10¾" (1.8 m) and has body measurements of 36-25-34 inches.

She completed her graduation from Whitmer High School in Toledo in 2001.