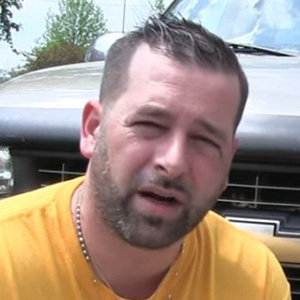 Amiri King is a YouTube comedian who has got more than 303,686 subscribers on his channel. He posts rants, skits, and parodies on his YouTube channel. Along with that, his car commercial parodies and My Vlog is Better Than Yours series got people’s attention even more.

Among many of his famous videos, Chevy Colorado Parody and Chevy Silverado Parody 2 has got more than 5 million views. Besides his YouTube channel, he is also the chairman of The Amiri King Foundation, a foundation which is based on helping people suffering from serious disease.

Although at the age of 16 he was pled guilty to 2nd-degree robbery and was released from prison at the age of 21, this comedian didn’t lose hope and decided to see the bright side of life and took a fresh start in his life.

Who Is The Wife Of Amiri King?

Amiri King’s love life has been an open book. He is married to an Irish woman named Sara Ruminski. Together they have three gorgeous daughters Kennedy, Tilly, and Marcy. Amiri King posing along with his wife and his daughters while having lunch at Florida (Picture: Amiri's Instagram)

The family of five seems to be very close to each other as he often posts pictures spending quality family time with his wife and his children.

YouTube comedian Amiri King, age 39, was born in 1979 in the United States as Tony Donovan. He celebrates his birthday on 10th of July. Being born in America, he holds an American nationality. Talking about his education, he completed his high school studies from Buechel Metropolitan High School.

From a very small age of 8, Amiri spent his life in and out of mental health institutions and boys homes. He also spent time living on the streets of Louisville. Adding to that, due to some family issues, he ran away from home at the age of eleven and has lived in several homeless shelters including the Wayside Christian Mission and the Healing Place.

Talking about his family, till this very day, he takes good care of his mother and flaunts her pictures on his Instagram now and then. However, his father is no more with him.

Along with his growing YouTube channel and his foundation, Amiri is also an editorial and advisory board member at Tribunist. Adding, he is also an executive director at Royal media.