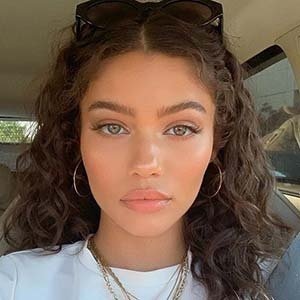 Audreyana Michelle is a model and internet personality who rose to the limelight after getting spotted hiking with pop star Justin Bieber in LA.

However, she has already built her own stature in the glamour industry—has modeled for both Khloe Kardashian’s jeans line Good American and Kylie Jenner’s cosmetic brands.

Michelle is also signed with Next Miami, Premier London, and Freedom Model Los Angeles. Likewise, she is also associated with labels like Tobi, LPA the label, PRISM Boutique and Pac Sun.

Audreyana's biological parents are separated. Not much is known about her father; however, her mother, Stephaine, has moved on and already found love in her life and got re-married. Professionally, Audreyana's mother owns the modeling agency Agency Arizona.

Her mom was the one, who encouraged her to pursue her passion; she always wanted to model and share her love for the fashion world through photography. Besides parents, Audreyana has a younger brother in the family.

Audreyana has successfully concealed her romantic love life and kept it far from the media reach. However, there was a time when she and Justin Bieber used to be an item.

After sharing a hike together in July 2017, both the pair were speculated to be dating. But the romance rumor fizzled out as Audreyana and Justin (Hailey Baldwin) were stopped seeing together. Justin was already reunited with his long-term on-off girlfriend, Selene Gomez, by November 2017. Justin and Selen even traveled to Jamaica together to attend Justin’s father’s wedding after reuniting.

As for Audreyana, she was also spotted with the reality star Scott Disick on a romantic night out at a club in September 2017. But, the relationship didn’t seem to work out, and they were not seen together for much longer.

Scott is well known as the star of Keeping Up with the Kardashians and his on-off dating life with Kourtney Kardashian.

Audreyana was born on 13 April 1999 in Oklahoma City, US. She debuted in the modeling industry after her mother enrolled her in an agency in the summer of 2016.