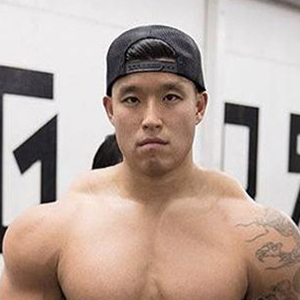 The co-founder of the YouTube channel JustKiddingFilms, Bart Kwan is a power packed entertainer, who tackles social, contemporary and cultural issues with a comedic touch and presents it in front of the audience. Along with his friend Joe Jo, he created a Youtube channel which later able to gather an international fanbase with almost 15 million subscribers.

Bart is a writer, director, and actor. His creative new ideas gave him a chance to perform internationally, speak on panels at prestigious film festivals, headline events at prominent universities, and collaborate with award-winning directors, producers, musicians, and other comedians.

He is also a fitness freak and is very conscious of his healthy diet plans. Besides, he has also worked in short films including 'She Has a Boyfriend' and GunFu.

Bart Kwan is married to a producer, actress, model named Geovanna Antoinette, who is also the creator at Barbell Brigade.

The couple shared the wedding vows in 2015 in attendance of their family and friends. They even uploaded a marriage video on their joint YouTube channel on 11 October 2015. Two years after the nuptials, Bart and his wife, Geovanna welcomed a baby boy named Taika Kwan in 2017. They even created an Instagram account in the name of their son which has more than 223k followers.

The family of three can be seen having a quality time on their social media roaming around different places. As of now, Bart is super close with his family and relished happy lifestyle with family.

Net Worth Of Bart Kwan

American YouTuber Bart Kwan has accumulated the net worth of $2 Million from his profession as writer, director, and actor.The multi-talented personality came up with the idea of one of the most successful channels, JustKiddingFilms while he was studying at the University of California, Los Angeles with his friend Joe Jo.

After the success of the channel, he came up with several other channels including JustKiddingParty, JustKiddingGamer, and JustKiddingNews. His fitness video about squatting in heels VS shoes went viral back in 2016. Social Blade's record shows that Bart makes the YouTube revenue from $66.5K to $1.1 million annually.

Apart from professional life, He started a new channel, Bart & Geo where he posts videos of his personal life and his journey with his wife and his son.

Bart Kwan, age 34, was born in 1984 in California, America. He celebrates his birthday on every 18th of November. When he was six years old, his parents got divorced. However, he has a healthy relationship with his father and mother.

Bart Kwan stands tall with a height of 5 feet and 9 inches along with the weight of 88.5 kg. He holds an American nationality, but his ethnicity is reportedly an Asian. Bart has three pet dogs named Meatloaf, Briggy, and Fawn. He has a handful of tattoos on his left shoulder.