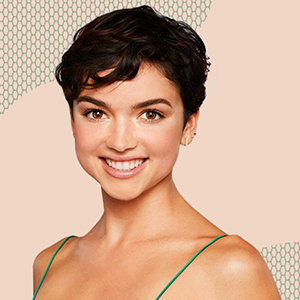 Former Bachelor's celebrity star Bekah Martinez and her beau have finally become parents. The duo, who were surprised by Bekah's pregnancy previously, have now added a third member to their family with the arrival of a baby daughter.

Bekah rose to the fame after she appeared as a cast on the 22nd season of The Bachelor. Her bold pixie haircut accommodated her to earn popularity during her presence in the show. She is also the avid outdoorswoman and loves to participate in rock climbing and snowboarding.

The former Bachelor's star Bekah and her boyfriend have now started a family!

Bekah Martinez, age 24, and her boyfriend, Grayston Leonard, are blessed with their first baby daughter; their bundle of joy arrived on Saturday 2 February 2019. As confirmed by People Magazine, she gave birth to the baby via water birth at the Natural Birth Center in Los Angeles. Bekah Martinez and her beau, Grayston Leonard, during the arrival of their baby daughter (Photo: people.com)

Four days after the birth of the baby, Grayston, the founder of the rock climbing gym Long Beach Rising, confirmed the happy news with Instagram followers on 4 February 2019 sharing series of photos of the baby. In the caption, Grayston poked fun at his daughter with a hashtag “no pictures please,” as his small baby was trying to cover her face while he captured a photo.

Back in October 2018, Fresno-native Bekah came up with the news of her pregnancy with her fans confirming it with PureWow. She told she was pregnant three months after they started their relationship.

Though her pregnancy was unplanned, she is now the mother of a kid. The graduate of the University Of California, Bekah, and Grayston have been dating each other since January 2018.

Bekah took to her Instagram page to share her story about her unplanned pregnancy and the tough times that she and her boyfriend had to endure. But she also stated that the birth of their daughter has helped them create a bond much stronger than before and that the two are still getting to know each other day by day.

Though the two are now parents of a daughter, who goes by the name Ruth Ray De La Luz Leonard, the couple have not yet thought about getting married.

Currently, the small happy family is enjoying a blissful life and both Ruth and her beau seems to be relishing their new role in life as mother and father. They can be seen spending quality time as one happy family as evident by both Bekah and Grayston's Instagram posts. On the occasion of Bekha's recent birthday, Grayston, in his Instagram, uploaded a photo of the of himself, Bekha and their daughter together cuddling and just enjoying the moment.

Born in 1995 in Fresno, CA, Bekah Martinez celebrates the birthday every year on 10 February. Her real name is Rebekah Martinez, as per the wiki. Talking about her family, she has a sister, Rachel and a brother named Joel Martinez. She calls her father, Joe as her one of the best pals in her life.

Having a height of 5 feet 5 inches (1.65 meters), Bekah holds American nationality and belongs to mixed ethnicity. She has a bold pixie haircut, which is adored by all of her fans. She earned a college degree from the University Of California, Irvine.