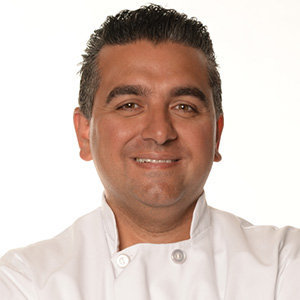 Buddy Valastro has won the heart of many food lovers as he is the man who consolidates his family recipes and displays the delicious and mouth-watering cuisine in front of the audiences. And the blend of incredible Italian culture on his cookery make him unique from the other chefs.

Buddy Valastro is known for hosting and judging the show Cake Boss. He also appeared in Next Great Baker and Buddy's Bakery Rescue.

Blossoming Love With Wife, Together For 17 Years!

The couple met each other through their family. At that time Buddy's sweetheart Lisa was only 19 years old. After their first meeting, the pair went to a club together. Later, they had an official Italian dinner date.

After the years of togetherness, he shared the wedding vows with Lisa on 14 October 2001. The father of four youngsters, Buddy, has been spending quality time with his family members and often gives the glance of his affection with his spouse and children on social media. Buddy Valastro pictured with his wife and four kids at AT & T Center on 1 December 2018 (Photo: Instagram)

Moreover, Buddy and his wife, Lisa Valastro, have now successfully prolonged their relationship to 17 years. On 14 October 2018, he warmly wished his lady via Instagram post. He poured his feeling to his better half on caption saying that she always has been his best friend and a beautiful wife. On the top of everything, she has proved herself the amazing mom and partner. Thus, Buddy never pauses to gush about his wifey. Similarly, in April 2018, Buddy gave a sweet speech dedicating to his wife. He said,

"I know that when Cake Boss started and everything, we've had our ups and downs and our love was put to the test. But through it all there's not a better person, someone I love more, and this is a little way for me to say thank you."

Buddy Valastro's Salary And Net Worth

American baker Buddy Valastro has garnered the net worth of $10 million, which he collected from his career as a renowned chef. Just at the age of 11, he started working at the Carlo's Bakery, his family business. After his father died when he was 17 years old, he commenced the family business on his own.

Buddy is also the star of "Cake Boss." Likewise, he also made his appearance in the spin-off show Kitchen Boss. Previously, the Cake Boss star served as the host and the judge of the TV show Next Great Baker from 2010 to 2014.

As per The Richest Magazine, he is the owner of the New Jersey home with a value of $1,300,000 until 2011. Amidst the stardom, he has fallen into controversies a couple of times. On Thursday on 13 November 2014, he was arrested in Manhattan in charge of driving while intoxicated.

On 22 June 2017, his mom passed away, surrounded by family. Buddy, who stands at the height of 5 feet 6 inches, holds American nationality and belongs to Italian-American ethnicity.