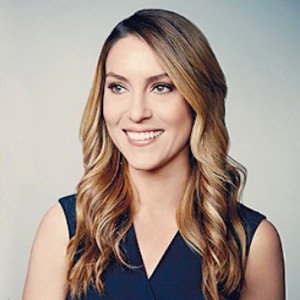 "Love Me to the Moon" is the phrase that Rachel and her husband engraved in their wedding rings, which reflects the love between the couple. Rachel Crane is a CNN reporter and is working as an innovation and space reporter. She is also known for making original video content in the prime time CNN program, City of Tomorrow. She is working as a CNN reporter since April 2014 and has covered modern innovators like Elon Musk and Jeff Bezos. She is also the recipient of NewSpace Journalism award in 2016.

The 32-year-old CNN reporter is married to her longtime boyfriend, Andrew Marks, an investment banker by profession and the son of a billionaire, Howard Marks. The high school sweethearts exchanged wedding vows on 7 October 2017 in French Riviera at the Villa et Jardins Ephrussi de Rothschild.

The lovebirds took a quick dip in the Grand-Hôtel du Cap-Ferrat in France few moments before their grand wedding. Their marriage was A Midsummer Night's Dream-themed ceremony with romantic floral arrangements created by the ace florist, Thierry Boutemy.

Rachel was dressed in a classic custom Oscar de la Renta dress, and she wore a JAR engagement ring and fabulous flower earrings by Stephen Russell.

She also posted a picture with her husband, Andrew on her Social site on 7 October 2017 where she said that she got married to her best friend. Rachel just recently posted an image with her beau, Andrew to mark their seven months of wedding anniversary on her Instagram account in April 2018. The wedding picture of Rachel and Andrew at Saint-Jean-Cap-Ferrat, shared on 7 April 2018 (Photo: Instagram)

Rachel and her beau, Andrew were in the same high school inmates, who were dating each other since 2015. The anchorwoman posted a picture of her then-boyfriend, Andrew on 7 November 2016, in which she said,

A year ago I ran into that sweet boy from the high school hallways. It has been my best year on.

The CNN anchor social media posts are filled with pictures and posts about her parents. She revealed that her father’s nickname was a monster on her Twitter account on 29 October 2015 when he worked at a government job. The Journalist had also thanked her dad for the genes that she has inherited from him.

Rachel had shared a snapped a birthday greetings for her mother on her Instagram account on 28 September 2015. In the picture, Rachel described that her mother is the one, who had taught her to laugh since both of them were in all smile enjoying their ice cream.

Rachel Crane celebrates her birthday on 26 October. She is 32 years of age, born in the year 1985 in the United States as per wiki. Her birth sign is Scorpio. Rachel stands a few inches shorter to the height of her senior working colleague of CNN named Natalie Allen who is 1.75 m (5’ 9”) tall.

The TV reporter has completed her Bachelor's Degree in Religious Studies attending Princeton University in 2004. She then went to New York University to get her Master’s Degree in News and Documentary Film in the year 2008.