A son’s first role model is his father and replicates his every move. Well, the player turned model, Dana Isaiah is preparing for his fatherhood as he is all set to welcome his first baby with his wife, Jordin Sparks. Dana, who is an accomplished model, married his then-girlfriend Jordin in a private affair on 16th July 2017, announced in November that they are expecting a baby boy.

Dana’s Prepares To Be A Father!

Dana and his wife are now expecting a baby boy. Yes, you heard it right! Dana and Jordin revealed that they are ready to welcome a baby boy into their family.

It was in early November when the news of Jordin’s pregnancy surfaced in the media. Weeks after the news surfaced, Jordin revealed the sex of her baby in the gender revelation party. She shared the Instagram picture as well on 24th November 2017 officially announcing that she is pregnant with a son. 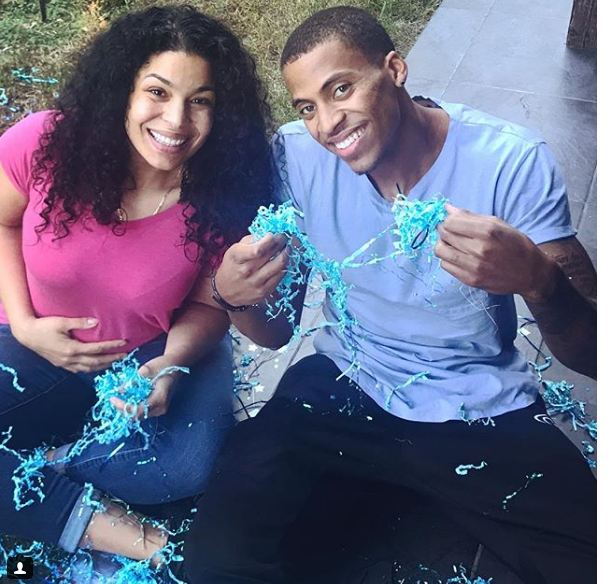 The model made his first appearance with his singer wife Jordin on 17th Annual Harold and Carole Pump Foundation Gala together as then girlfriend and boyfriend.  Dana met Jordin for the first time at Los Angeles, and Jordin shared her feelings after their first meet with People and said:

“A couple days after we had actually met, I was like in my head, That’s going to be my husband! That’s my husband right there, When I’m with him, I feel comfort and safety and calm and peace, and those aren’t things that I normally felt. So it was a little wake-up call for me.”

The duo who married secretly in 16th July 2017 and kept the news away from the media for a long time. The fact that Dana is three years younger than his spouse didn’t prevent the couple from having a beautiful relationship.

Though previously Jordin’s name was linked with Blake Lewis, Steph Jones, Jason Derulo, she is now enjoying every moment of wedding life with her husband, Dana.

Professional Life And Net Worth Of Dana:

Dana is much known for his modeling works in the areas of fitness and fashion. He had also appeared in many publications like Lapalme magazine. The self-proclaimed ‘Fitness enthusiast’ has an attractive figure which helped him set his name in the field of modeling. As a Southeastern University student, he played basketball.

While talking about his net worth, the exact figure of his fortunes is not evaluated yet. But as looking at his career, it can be said that he is paid well for his job. His wife Jordin Spark, who is also the singer and songwriter, has a reported net worth of $10 Million.

As per wiki sources, Dana was born in 1992 and celebrates his birthday on May 3 of every year which makes his age 25. Dana, whose birth sign is Taurus, belongs to Afro-American ethnicity. Dana is blessed with a tall height which fits him to be in modeling. As he is a family man, he usually loves to posts glimpses of the quality time he spends with his dear ones. He had a dog named Zeus.

Dana loves to be inked and has many tattoos on his chest and hands. He works extremely hard on his physique which gives him his ribbed abs.