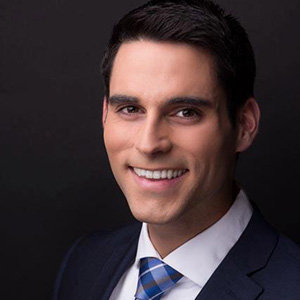 American meteorologist Drew Tuma turned his hobby for weather into a career and never felt like he was working a job of forecasting weather. The AMS Certified Broadcast Meteorologist gathered his first on-air experience from PCN-TV and pursued his passion starting as a Chief Meteorologist of WHSV TV3 Winchester.

ABC News meteorologist Drew Tuma is a supporter of LGBT community and is a proud member of the gay community for a long time. He prefers to attend the LGBT program for an in-depth discussion about the issues faced by lesbian, gay, bisexual and transgender communities.

In June 2017, he featured in the episode of a Canadian radio show Beyond the Headlines where Drew discusses the LGBT community issue faced by Bay Area's community. In the discussions led by Cheryl Jennings, the ABC 7 meteorologist was joined by Reggie Aqui, Sister Roma, and Jeff Cotter. He also attended the National Lesbian Gay Journalist Association program in September 2017.

Although Drew is openly a gay supporter, he has yet to unveil his sexual preferences and whether he has a partner or not. At one point, he shared a photo with fellow anchor, Natasha Zouves in November 2017 citing they were for a dinner date. But they are only good friends and usually see each other in work at 3 A.M. Drew Tuma and his ABC colleague, Natasha Zouves, in a dinner date in November 2017 (Photo: Facebook)

Drew has yet to get married as of January 2019. In fact, on one of his tweets of March 2018, the meteorologist uttered that he was married to his job. He is reportedly relishing his single life residing at the San Francisco Bay Area.

Drew Tuma's Net Worth And Salary

Drew, age 30, summons the net worth from his career as an American meteorologist. According to Payscale, ABC News meteorologist earns an average salary of $76,700 per year and their annual income ranges from $64,812 to $98,757. The station of ABC in San Francisco Bay Area named him as a meteorologist in July 2014.

Before ABC, Drew joined Fox Television network in the Washington area where he served for seven months. He was also the evening meteorologist of TV3 Winchester from September 2010 to December 2013. The primary meteorologist forecasted the weather for 6, 7 and 11 o'clock newscasts throughout the weekend.

He commenced his meteorologist career as a weather intern of CBS 3 in May 2009. The Penn State University graduate gathered the weather data and created the weather graphics using WSI TruVuMAX weather system. He got mentored by the meteorologists Doug Kammerer and Kathy Orr.

Born in 1988, Drew Tuma has his birthday on the 17th of June. In his family, Drew has a sister who got married to her husband in November 2015. The meteorologist is also a proud uncle. He often showcases his parents and niece on social media and spends quality time with them. Drew stands at a decent height and holds American nationality.

Drew received his education from Penn State University where he graduated with a degree of Bachelor of Science in Meteorology. The LGBT supporter had an interest in math and science since his high school days. As per wiki, he cites that his passion for weather is natural for him.