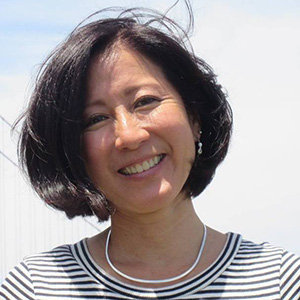 Ellen Nakashima is a veteran journalist who has covered the big issues dealing with surveillance, counterterrorism, and intelligence. She was even named as the paper’s 2017 alumni of the year.

With the two decades of expertise in reporting, Ellen has won the handful of awards including Gerald Loeb Award 2014 and Pulitzer Prize for Public Service 2014 for covering the news on the hidden scope of government surveillance and their policy implications.

Having a glimpse at the Washington Post's Veteran Reporter Ellen Nakashima's personal life, it illustrates the longterm romantic relationship with her husband and their daughter. She got married to Alan Sipress, a former correspondent in the Middle East; however, the actual date when the pair shared the wedding vows is unknown. As per the washingtonian.com, Ellen was already bound in wedlock chain before 2007.

Her husband, Alan, is the master's degree holder from Delhi School of Economics and has an experience of 11 years as economics editor in Washington Post. As per donate.dailycal.org, she and her husband met each other through the Post, and he later joined her in Jakarta. She had never thought about going to Jakarta which she explains as,

With the happily married life, Ellen never fails to amaze the fans with her charismatic and fluent relationship with her family along with a successful professional career. On 16 August 2016, she shared a family photo from their trip where all the family members posed for a picture with glee. Smiling with glee, Elle pictured with her hubby and their daughter during a vacation (Photo: Facebook)

Currently, the family of trio maintains a healthy bond and has been residing in Washington D.C.

Washington D.C. based journalist Ellen Nakashima has kept her birthday secluded and also her age. Talking about her parents, she was born to a Japanese-American father who was a native of Hawai. She belongs to mixed ethnicity, as per the wiki.

After completing high school, Ellen earned her Bachelor's degree from her college; the University of California, Berkeley in Humanities in 1984. Later, she enrolled City, University of London where she completed her education with the Master's degree in international journalism.

She got her first job in Journalism as National Security Reporter at The Washington Post in 1995. Since then, she has been actively involved in covering the covers issues relating to cybersecurity, surveillance, counterterrorism and few more.

Having long experience of over two decades as a reporter at the Washington Post, she has collected fruitful amount of wealth. As per the survey by Paysa, an estimated salary of Washington Post Reporter ranges between $51,571 and $73,306.

The same year in 1995, she joined The Post where she met her husband for the first time. Besides being a reporter, she also has served as Southeast Asia correspondent and also has reported the White House and Virginia state politics.