Not all celebrity couples are celebrity pairings. Few actresses chose to share an intimate relationship with a non-celebrity partner and Janet Montgomery is one of them. English actor Janet is profoundly known for her role of Ames in the 2010 Fox TV series, Human Target. Janet also got the 2015/16 nomination at the Fangoria Chainsaw Awards for her Mary Walcott’s role in the 2014 horror TV series, Salem.

Not all celebrity couples are celebrity pairings. Few actresses chose to share an intimate relationship with a non-celebrity partner, and Janet Montgomery is one of them.

English actor Janet is profoundly known for her role as Ames in the 2010 Fox TV series, Human Target. Janet also got the 2015/16 nomination at the Fangoria Chainsaw Awards for her Mary Walcott’s role in the 2014 horror TV series, Salem.

The 32-year-old actress is dating a guy named Joe Fox since December 2017. She shared a picture along with her boyfriend to mark their ten months of togetherness in early September 2018. 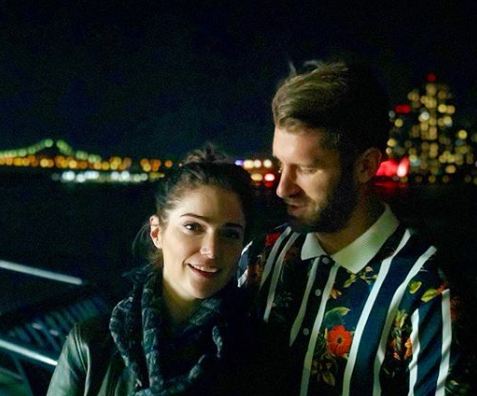 The couple relished their time together and soaked up the sun at a pool in Los Angeles, California, on 6 May 2018. Apart from that, the Skins actress also enjoyed Valentine's Weekends in Quintana Room Mexico with her beau. The lovely duo savored their moment cycling in the beautiful setting.

Besides Joe, Janet defines true friendship with her BFF, Ricardo Gibbolo. The artist uploaded an Instagram image with the birthday guy, Richard on 21 May 2017 and described him as the husband of the year.

Dating Rumors; Did She Had Romantic Tie With Jeremy Renner And Charlie Cox?

Before Joe, the Human Target actress was rumored to be dating Daredevil actor Charlie Cox in May 2014. However, both the artist has never given word of mouth about their possible affair.

Besides Charlie, Janet was reportedly dating Avengers actor Jeremy Renner in 2011. The actors met on a plane from Vancouver to Los Angeles while Janet was roped in with the Fox action drama, Human Target and Jeremy was about to shoot Mission Impossible: Ghost Protocol. They also reportedly hiked together in L.A. and enjoyed their gala time in Europe. However, the alleged couple never confirmed their relationship.

The New Amsterdam star, Janet Montgomery, welcomed a daughter with her boyfriend, Joe Fox, on 1 March 2019 at New York-Presbyterian Hospital in N.Y.C. Janet revealed the news of her delivery through an Instagram post, where she shared several pictures of her newly born child.

Pouring her happiness, she wrote, 'And just like that, life was never the same again.' Later, she did reveal the birthdate and the child's name. Besides, Janet did not miss thanking the doctor, who was involved in her delivery. She mentioned Dr. Raymond Wong was had been on the journey with her from the beginning of her pregnancy. And Dr. Wong kept her and the baby safe and calm in one of the scariest and the most precious moments of her life.

As per the doctors, the beautiful baby girl was in distress, and she had contracted a uterus infection.

Despite that, she now lives a healthy and happy life and spends her time with family and children.

What Is Janet's Net Worth?

Janet summons the total net worth of $5 million from her professional acting stint since 1997. She added the significant part of her increasing wealth portraying the role of Beth in her 2008 debut TV series, Skins. She reportedly charges $40000 per episode in any television shows, and her career length suggests that they have garnered massive fortunes.

Apart from television, Janet also cements her paycheck from the big screens. She essayed the role of Madeline in the 2010 blockbuster film, Black Swan. The movie made a box office collection of $329.4 million. Apart from that, she starred in the 2011 American comedy-drama film titled Our Idiot Brother, where she portrayed the role of Lady Arabella Galloway.

She has a younger brother named Jason Montgomery, who is famous for his role as John in the 2016 film, Invited for Dinner.

Besides her busy schedules, the Black Swan actress invests most of her time in skincare routines. Some of her daily skin products include argan oil intense moisturizes, Good Genes by Sunday Riley, and Tatcha face mask.