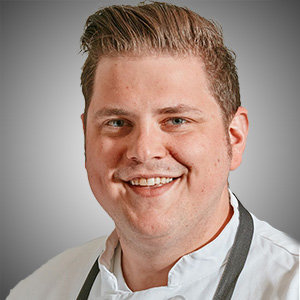 Luck is on his right side as Joseph Flamm a.k.a. Joe has been blessed with a baby boy within a year of winning the coveted title of Top Chef. As being a devoted chef, he has garnered the honorary prize and successes throughout his career.

Joe Flamm is a top chef and received recognition when he claimed the title of the 15th season of Top Chef. Not only his profession but he also rejoices the happy life with family including his wife and a newly born baby.

Rejoiced The Best Moment Of Life With Wife; Welcomed A Baby

Joe Flamm is married to his beautiful wife, Hillary Delich, who is a senior consulting manager at Vodori.

The couple shared their wedding vows in May 2015. They had announced that they were expecting their first kid through a post on Instagram on 15 June 2018. And after four months of their announcement, they were blessed with the cute little boy. As of now, they have welcomed their first child, Luka William Flamm on 4th of December 2018 at Northwestern Medicine Prentice Women’s Hospital in Chicago. Joe wrote on his Instagram about the happy news asserting that the day was the best day ever in his life.

As of now, the couple savors the best moment of their family life with a newly born baby.

Know About Joe Flamm's Net Worth

Joe Flamm's career as a renowned chef is the primary source of his net worth. Based in Chicago's famed Magnificent Mile, he serves as the executive chef at Spiaggia, which is an Italian restaurant.

The chef is also the winner of "Top Chef" season 15. He defeated the Hyde Park native chef, Adrienne Cheatham for the prime spot in the culinary contest. During his course to win the title, he had bagged several prizes as being the winner of the title. As reported he has kept his $125,000 prize money for buying a new house.

Joe did not want to be part of Top Chef, but his partner Tony Mantuano pursued him to compete. He didn't have to regret his decision as he won the competition and won prize money of $1.2 Million.

Joe, age 32, fought his way back to the finale in 'Last Chance Kitchen,' after he was eliminated during a sudden death quickfire challenge earlier. Hence, he proved his versatility with the remarkable skills of Italian dishes that he presented in 'Top Chef.'

Joe Flamm learned to cook since his childhood age as his parents were busy with their works serving 5 p.m. to 2 a.m. shift daily. He worked at Art Smith’s Table 52 and Stephanie Izard’s Girl and the Goat before he joined Spiaggia.

With his considerable cooking skills, he has rejoiced the successful career with a colossal amount of fortunes and wealth.

You Also Need To See This: Virginia Wade Married, Husband or Partner, Lesbian, Net Worth

Born in 1986 in the United States, Joseph Flamm celebrates his birthday on 6th of April every year. He holds an American nationality and belongs to white ethnicity. Joe Flamm is the graduate of Le Cordon Bleu College of Culinary Arts in Chicago.