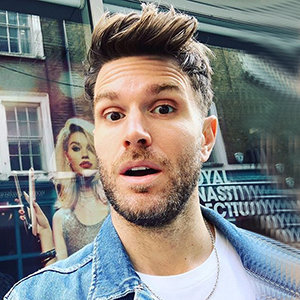 Making his way to the celebrity highlights as the host of Made in Chelsea, Comedian Joel Dommett, has made all of us chuckle with his sense of humor. He also served as the writer and performer on Impractical Jokers. All these achievements started with a standup gig in 2007 in LA.

Asides from these, his acting career boomed playing the character of Toby Wood on the 2010 comedy series Popatron and the E4 drama Skins as DC Sweeney. Joel's participation in the reality show I’m A Celebrity in 2016 also boosted his popularity.

Joel Dommett is happily taken. He married his girlfriend-turned-fiancée Hannah Cooper in Septemeber 10 of 2019, nearly after two years of getting engaged. The wedding took place in a hotel’s private beach located on Greek Island with 27 guests.

The ceremony had some drama behind the scenes with unexpected outsiders, but, in the end, things went pretty well.

After their marriage, his wife Hannah changed her surname as Dommett. In an interview, 2019, Joel opened up about his journey from the meeting to exchanging vows with each other. He confessed that it was Hannah, who approached him with a message of a heart-eyed emoji. And that was it! The couple started their romantic journey from 2016 and remain faithful to their vows.

Joel announced his engagement with Hannah just four days after the couple celebrated their first anniversary in December 2017. Both the partners congratulated each other via social media captions and shared some sweet couple pictures. Hannah's mesmerizing gaze and bodily features might be the factors that lured Joel.  She is a 5-foot 10-inch girl with blonde hair and blue eyes.

The budding relationship between Joel and Hannah is evident in their respective media updates. Both of them like to celebrate their happy moments with their fans. Most recently, on 3 May 2019, they were proud to announce that they bought a new house.

Joel Dommett was born on the 8th of June, 1985. The 34 years old comedian/actor was born and raised in Gloucestershire, England. His birth name is Joel Patrick Dommett. His mother is Penny Dommet, who works as a garden designer, as suggested by her Twitter profile. She also operates via her official website.

It seems like Joel’s parents split up somewhere along the way, and his mother has moved on. Joel shared a photo of his step-dad in his 2015th Instagram's story. And from the look of it, he seems to have a good relationship with his family.

Joel is best known for his contributions as a writer and actor for Skins(2007), The Inspector Lynley Mysteries(2001), and The Edge of Love(2008). He also appeared in the early episodes of Pointless(2009).

He started his career at the age of 19 with a stand-up gig at a local place. After serving as actor and writer on several shows, in 2011, Joel hosted Live in Chelsea, a show that revolves around Made in Chelsea. Similarly, he also participated in bushtucker trials and came second place at the end.

Although Joel has sufficient credits to his name, his earnings are still under review.