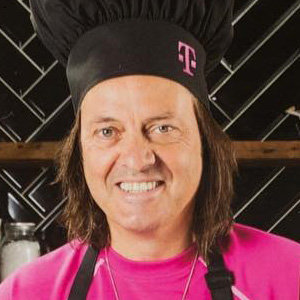 John Legere has a tremendous honor and prestige in a platform of telecommunications. He is serving as the CEO of one of the reputed mobile communication company, T-Mobile. Before T-Mobile, the American businessman worked for companies like Dell, AT&T, and Global Crossing.

In the telecommunications company AT&T, John served nearly for 20 years and held the position of senior vice president at American multinational company, Dell.

Father Of Two Daughters: Who Is His Ex-Wife?

CEO of T-Mobile, John Legere is a twice-divorced man, who has managed to conceal most of the details regarding his estranged relationship. However, it is a known fact that he is a father of two.

With his relationship with anonymous ex-wives, John shares two daughters namely Elizabeth Legere and Christina Legere. Though John remains taciturn to reveal the identity of his former spouses, his daughter once gave a hint about her momma.

In November 2013, his daughter Christina shared a rare photo of her mom which was captured during their reunion. She defined the mother-daughter-reunion as the 'Moment of the Week' in her Twitter caption. Apart from John's secluded marriage life, he is active on social media handle and often shares his gratified moment spent with his daughters. The University of Massachusetts alum showcased his two grown-up children in June 2018 and gushed that he feels proud to be a father of his two amazing daughters. He also spent the vacation with them on the Bahamas in July 2018.

Currently, John is a single guy, who is appreciating his moment with his family consisting of two daughters. Though his kids wanted him to inaugurate his dating life, John has not shown his interest.

How Much Is John Legere's Salary And Net Worth?

John, age 60, is an American businessman who savors the hefty net worth of $80 million. As a CEO of T-Mobile, his base salary is $1.5 million and earns some enormous amount of payrolls due to bonuses and stock awards.

In November 2018, John kept his luxurious New York City penthouse on a sale for nearly $18 million. He brought the apartment of almost 3,600 square feet consisting of four bedrooms and four bathrooms in 2015.

Born on 4 June 1958, John Legere's hometown is in Massachusetts. The CEO of T-Mobile grew up with his parents in a community at the northern part of the state in Fitchburg. His mother Jean Legere, who died in December 2014, was a nurse while his father worked for the government. He also has a sister named Nancy Ginnity.

John acquired his education with a business degree from the University of Massachusetts and completed his MBA from Fairleigh Dickinson University. He has a habit for speaking his mind, and one of his famous quotes read, 'What a stupid, broken, arrogant industry.'

Since his high school days, John has been an avid runner. As per wiki, the American businessman was at the age of 56 when he completed the Boston Marathon.