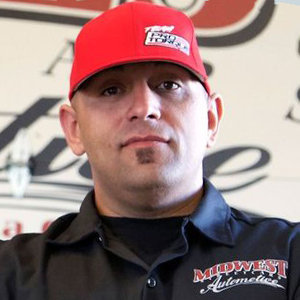 The street racer Justin Shearer is a successful reality star and is best known as Big Chief. He is famous for his appearance on Discovery reality TV series Street Outlaws. Justin is also popular for his modified fantasy car "The Crow," modified form of 1972 Pontiac LeMans. The well-established street racer is now working in Midwest Street Cars.

Justin Shearer has accumulated the net worth of $2 Million. He gathered the fortune as being a reality star and a street racer. Justin summoned the wealth featuring on the Discovery reality TV series Street Outlaws. Justin has been active on the series for 88 episodes which helped him to amass a lucrative amount of revenue. He also earned money through his racing career.

The reality star built Exotic Cars and named it "The Crow." The car is a modified form of 1972 Pontiac LeMans. He has been part of OKC street racing scene since the tender age of nine. As of now, Justin is increasing his fortune working in Midwest Street Cars Automotive office.

Justin and Allicia met each other at a gas station. At that time, Justin was just 18 years old and worked at a full-service gas station. In an interview with Discovery, he revealed that he got nervous in their first meeting.

Justin with his then-girlfriend married each other on 29 September 2006. Also, Justin and his wife Allicia are parents of two children named Corbin Shearer and Covil Shearer. In an interview with Discovery, he said that his proudest moment by far was when he with his wife welcomed their children.

He often flaunts pictures of his wife and children in social media. On 18 August 2016, Justin shared a photo on Instagram wishing his wife on her birthday. He also Instagrammed a picture of his two kids on 1 February 2018 saying his sons were ready for a race. Justin Shearer shares the photo of two kids and denotes them as second generation racers on 1 February 2018 (Photo: Instagram)

Though Justin has been spending a relishing moment with family, a rumor about his divorce with his wife struck the internet. The news about couple's divorce surfaced when he was reportedly in a dating affair with a lady named Jacklyn Braasch. Jacklyn posted a photo, but the picture also had the identifier tattoo of Big Chief. Since then, speculation of Jacklyn being his new girlfriend spread in the media.

But now, the pictures have been removed from the social media which keeps their alleged relationship in the womb of mystery.

Born in 1980, Justin Shearer celebrates his birthday every year on 9 December. He was raised to parents in Louisville, Kentucky. Later, he moved to Oklahoma in 1992. He is currently of age 37. Justin, who stands at the height of 1.88 meters (6' 2"), holds an American nationality and belongs to white ethnicity as per wiki.