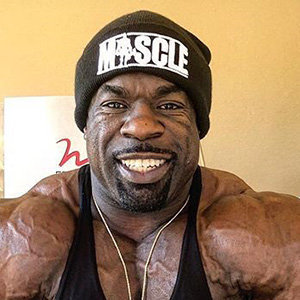 American bodybuilder Kali Muscle was once restricted to notorious San Quentin prison for seven years where he learned workout in his cell. Even though the correctional officers seized the prison weight, he had a passion towards bodybuilding.

Although Kali's diet was deficient in prison, Kali managed to build lots of muscles through the workout behind bars. After leaving the prison, he began working in film and television and created his fan base from YouTube channel. The bodybuilder as well as an actor has now withdrawn the criminal world and has become a motivational figure to the youth.

Although Kali Muscle, 43, is married to the Oakland native Dvyne Beverly, they have an estranged relationship. Talking exclusively to wikinetworth.com in August 2018, Dvyne stated that she is still Kali's legal wife and her lawyer will straighten out their divorce process.

The musical artist and Kali are in a heated court battle, and their next court date is on 21 September 2018. She is in a legal process of divorce and battling in the court with the help of lawyers at Maclean Chung law firm.

The lady, who has mesmerizing vocal abilities, stated heartfully that her husband is in the contempt of court as of now. Taking social media in late August 2018, she said:

My name will always be brought up and I'm directing all interviews for facts on if we are divorced or not? I am getting emails and inboxes the article says No? All haters I'm blocking you because time is money take notes this my life so dont tell me what to post unless you coming to court to support September [Kali Muscle] is in contempt of court as of now.

Kali's wife is a musical artist affiliated to the record label, Swolbizness Records. On their anniversary on 20 July 2014, the bodybuilder tweeted stating that he loves his wife more than lifting weights.

While they were in a relationship, Dvyne used to share the photos of them on social media. The R&B artist shared a series of a snapshot on 18 June 2013 via her Facebook and captioned the image as 'Me and my husband.' Kali Muscle and his wife Dvyne in a picture posted on 18 June 2013 (Photo: Facebook)

On 1 December 2016, Kali's wife confirmed that the duo was in the process of divorce via a post on her Facebook. The musical artist stated that even though they were in the process of separation, she loves Kali and is proud of what they had accomplished together. Dvyne added she would be fine as both were in the legal state.

Despite Dvyne's claim that she is a legal wife of him, the White T actor is dating a girl name, Helena Vlad. The duo has a YouTube channel named 'KALI & HELENA,' where they share relationship talks and prank stuff. At first, when Helena's ex-boyfriend sent her Kali's video of the Venice Beach workout, she thought that the bodybuilder was 'huge and psychotic.'

The duo met at the expo, which Helena attended with her friend. She became smitten with Kali, and the pair progressed their relationship and eventually started dating each other. Since their meeting, the couple has been inseparable and has flaunted pictures of each other on social media. Kali took his girlfriend Dvyne on her birthday to a restaurant and shared their photo on 19 February 2018 on his Instagram. While in the workout, Kali often brings his girlfriend and the duo are into the bodybuilding, powerlifting, and strength training. His first photo with Helena arose on 18 September 2016 where they visited Joe Weider's Mr. Olympia Las Vegas. Kali also often jokes about the gay boys who said his muscles were small on social media while working out with his girlfriend, Helena.

How Does Kali Muscle Gather Net Worth?

Kali Muscle gathers his net worth as a bodybuilder and actor. According to Socialblade, his self-titled YouTube channel has estimated earnings between $839 - $13.4K monthly and $10.1K - $161.1K yearly.

His income source also includes his stint in the movies and TV series like Savior, White T, Workaholics, and Raising Hope. He also gathered payrolls from various commercials including Geico ad of directing the traffic.

As per wiki, he coped with trauma and resorted to robbery after the death of his older brother while he was attending college.