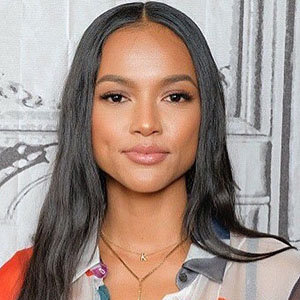 Karrueche Tran, who had a terrible love affair with the “Loyal” singer, Chris Brown, has now found love in NFL player. She and her new NFL boyfriend's courtship has surpassed nearly a year, and the penchant between the couple is still fresh.

Karrueche is popular as the ex-girlfriend of singer Chris Brown. She is also a model and has modeled for LoveSicc and appeared in the cover of Bombshell by BLEU.

Dating NFL player; Multiple Affair In The Past!

Karrueche Tran reportedly started dating NFL player Victor Cruz in October 2017. However, the couple went public about their relationship after the couple was spotted strolling holding hands in the streets of Los Angeles on Saturday, 16 December 2017.

As confirmed by Us Magazine, the 30-year-old actress and her boyfriend were in a secret relationship until they made an appearance in L.A. The American model often shares the glimpse of her romance with Victor on Instagram. On 11 August, the two were pictured spending their time chilling at a swimming pool. Prior to Victor, she was rumored to be dating Migos rapper, Quavo in January 2017.

Karrueche was also in a turbulent on-and-off relationship with Chris Brown from 2010 to March 2015. The pair had a split after Karrueche knew that her former boyfriend had fathered a child with another lady.

In February 2017, she even filed a case alleging Brown of physical abuse. She claimed that he threatened to kill her and accused him saying he had beaten her up in the past.

Back in 2015, Karrueche was linked with Rob Kardashian, and Dutch soccer player, Memphis Depay.

How Much Is Karrueche’s Net worth?

Karrueche Tran has the net worth of $900 thousand, which she gathered from her career in modeling. She mustered the revenue appearing in the advertisement of LoveSicc, and a cover of Bombshell by BLEU. Similarly, she appeared in the TV series, Claws, as Virginia Loc in 2017.

The California native also accumulated a lucrative income portraying the role of Vivian Johnson in the TV series The Bay from 2010 to 2017. She also collects the payroll from her self-titled YouTube channel. As per the Social Blade, Karrueche has an estimated YouTube earning between $80 and $1.3K monthly that helps her to earn the yearly revenue from $956 to $15.3K.

Standing at the height of 1.55 meters, Karrueche Tran was born on 17 May 1988 in Los Angeles, CA. She holds American nationality and belongs to Vietnamese and African-American ethnicity.

She grew up in a mixed raced parents where her father is African American, and her mother is Vietnamese. In July 2015, Karrueche revealed her father’s identity as a gay with Madame Noire.