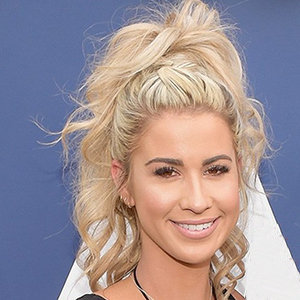 Katelyn Jae is an American singer mostly recognized as the better-half of country singer Kane Brown. She has released the music videos like 24KT, National Anthem, Perfect, and has covered Tory Kelly's Nobody Love. The prominent singer also auditioned at American Idol and The Voice and represented the US at the 2010/2011 Avon Voices.

The singer is endorsed to Wright Entertainment Group and has won singing competition during the first season of YOBI.tv and MySpace's Take the Stage contest.

Katelyn Jae and her husband, Kane Brown, welcomed their first baby girl, Kingsley Rose Brown, on 29 October 2019. Kane announced the happy news of his daughter's arrival through an Instagram post where he shared a picture of him and Katelyn with their newly born kid on 30 October 2019.

Also, he captioned the photo; KB3 ?? welcome to the family, Kingsley Rose Brown! Katelyn Jae and her husband with their newly born daughter (Photo: Katelyn's Instagram)

The news of Katelyn giving birth to her daughter came after five months of her pregnancy announcement back in April 2019. Kane announced the exciting news on 16 April 2019, unveiling the picture of Katelyn's sonogram via Instagram. While showcasing a short clip of the sonogram of their expected bundle of joy, the singer described that it was the 'coolest day of her life.' Katelyn Jae who is expecting her baby with husband Kane Brown stroll in June 2019 (Photo: Instagram)

On 5 June 2019, the couple became a highlight at the event when Katelyn walked at the 2019 CMT Music Awards red carpet with her husband showcasing their baby bump.

Since they made their expectation of child public, the love birds had updated every phase of Katelyn's pregnancy on Instagram with the snaps of her baby bump.

Further, the happily married couple had announced the name of their baby in August 2019 during the baby shower launched by Kane's close friends, Brittany Aldean and fellow country singer Jason Aldean.

Currently, the couple looks forward to taking care of and nurturing their newly-born daughter — congratulation to the lovely duo.

Katelyn and her longtime sweetheart Kane Brown, who inaugurated their relationship in 2016, are one of the fan-favorite couples. Although they managed to conceal their dating life for several years, her boyfriend Kane shocked the world when he announced his engagement with Katelyn in April 2017.

He purposed his ladylove Katelyn back in January 2017 and offered her an engagement ring. The hefty platinum ring is a cushion-cut diamond shape which the singer often wears on her hand during their outings.

Later, Katelyn and her fiancé shared their wedding vows outside the Nashville on 12 October 2018. The lovebirds answered 'I Do' in front of their close family and friends at the Mint Springs Farms in Franklin, Tennessee.

Later on 14 October 2018, Katelyn unveiled the nuptials moments with her Instagram followers, where her husband Kane kissed her at the forehead.

Katelyn derives the majority of the net worth from her professional career as an American singer. As per the reports of Socialblade, her YouTube channel Katelyn Jae has the estimated earnings of $118 to $1.9K yearly.

As for her husband, Kane Brown, he is an American country musician with a net worth of $6 million. During his job as an R&B artist since 2014, Kane released two studio albums Kane Brown and Experiment, and has featured singles like Can't Stop Love, Believe, and Chatt Chatt. He also won the three titles of American Music Awards in 2018.

Katelyn Jae, who was born in 1992, has her hometown in a suburb of Philadelphia, Pennsylvania. Her birthday is on 19 June. She had her upbringing in Chester Springs with her family. Her mother, Karen Lee, is a life spa manager. During her childhood, her parents got separated. The pop singer has two sibling brothers named Jay and Joel.

While the singer was in her sixth grade, her choir teacher recommended her parents to engage Katelyn in singing lessons. Talking about her body measurements, Katelyn stands shorter than her husband, Kane Brown, who has a height of 1.8 m (6 feet 2 inches).

Her nationality is American and has a birth sign as Gemini. Her ethnicity is Caucasian.