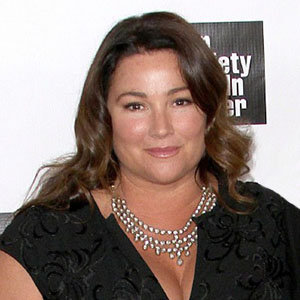 Weight fluctuation is something that is natural for a human body, but when it happens to a celebrity, it becomes a topic of concerns. Keely Shaye Smith is an American journalist and is best known as the wife of James Bond fame actor Pierce Brosnan.

She is also known for her ABC show, The Home Show as an environmental correspondent. After her wedding to Pierce, she went through weight gain and was the topic of trolls. But the former glamour model flaunts her curvaceous body and accompanies her celebrity husband.

Keely Shaye first met actor Pierce Brosnan on a Cabo San Lucas beach in Mexico at the age of 31 when she was working as a TV correspondent on 8 April 1994. After dating for some years, Keely delivered her first child as a son with Pierce named Dylan Thomas on 13 January 1997. The pair extended their family with another child, Paris Beckett on 27 February 2001.

After having two children, the duo tied the nuptials on 4 August 2001 at Ballintubber Abbey in County Mayo, Ireland in A Midsummer Night's Dream meets The Secret Garden theme wedding ceremony. Both the artists wanted a lovely Irish wedding, and a total worth of £100,000 was invested in flower decoration. Kelly Shaye (with lean body shape) and Pierce Brosnan on their wedding on 4 August 2001 (Photo: Hellomagazine.com)

Their older son Dylan, wore his favorite clothing line, a Hawaiian shirt and motorbike boots for his parents' grand wedding.

Her husband hired 15 helicopters to take their guest at the wedding venue. The grand wedding ended with a £30,000 cost of the firework spectacles.

Keely is also a stepmother of Pierce’s children from his previous relationship with actress Cassandra Harris. Pierce and Cassandra married on 27 December 1980 and had one son together, Sean. He later adopted two children late, Charlotte and Chris. The actor lost his wife and daughter both from ovarian cancer.

Even after a decade of the wedding, the romance between Keely and Pierce speaks volume about the duo. The adorable pair were photographed by the paparazzi when they shared a kiss on 18 July 2018 before heading on a lunch date at a nearby seafood restaurant in London.

Keely and her model son, Dylan were in London for the premiere of Pierce’s 2018 musical comedy movie, Mamma Mia! Here We Go Again. Pierce also took his Instagram on 19 July 2018 and thanked Britain for love. He also shared another picture on the same day on his IG feed, attending his movie premiere in New York along with his wife.

The pair has also recently marked their 25 years of together in a sweet photo post on 19 July 2018 which stated, Thank you for the love my love of these past 25 years, onwards.

Just a week from celebrating, the duo enjoyed a cycle ride side-by-side along the coast of Los Angeles, Southern California on 23 July 2018. Keely and her husband are married for more than 17 years, and her husband shared a throwback picture of the wedding on 4 August 2018.

The 54-year-old journalist has been on a weight gain spree after her wedding. Keely reportedly gained more than 70 lbs until 2008 and transformed from her lean look in her marriage. She now looks quite contrasting from her wedding photos as she weighed 15 stones.

She donned her body after weight gain in 2008 in a bikini, which was trolled by tabloids but her husband slammed gossips column. The journalist reportedly started to gain some pounds after the birth of her two children. In spite of gaining weight, Keely remains effervescent and flaunts her curvaceous body.

There were rumors about Keely going through weight loss routine, but she attended the UK movie premiere of the comedy-musical flick, Mamma Mia! Here We Go Again in July 2018 with her husband, Pierce looking no different than her usual self. Keely also suffered some health problems back in October 2009. Her health deteriorated after she ate carrot cake stuffed with a rock-hard walnut shell inside at a Los Angeles based restaurant.

The anchor reportedly sued the restaurant and accused that the walnut shell inside a piece of carrot cake may have fractured her tooth.

However, the restaurant immediately contacted its insurance after the reporter’s health concerns. The restaurant also insisted that they take food safety and cleanliness very seriously.

Keely Shaye Smith was born on 25 September 1963 in Vallejo, California as per wiki. The American journalist stands at the height of 1.74 m (5’ 8½“) and belongs to a white ethnic group. Her birth sign is Libra.