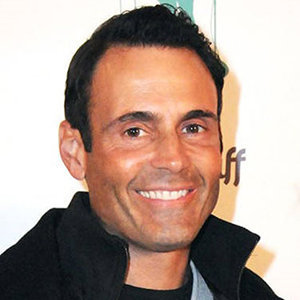 Before being known as a TV producer, Keven Undergaro spent his summer as a carnival worker in the east coast and winter in Los Angeles as the head writer of MTV’s Singled Out.

While he was fulfilling his routines, Keven realized that his then-girlfriend and now-wife, Maria Menounos, deserved a better life. So, he began focusing more on his creativity and launched projects like Longtime Listener, Fwiends.com, In the Land of Merry Misfits, Operation Shock and Awe… some, and Adventures of Serial Buddies.

Later, he and his wife co-created the online broadcast network AfterBuzz TV in 2010.

Keven has been married to actress Maria Menounos since 2017.

The two first encountered each other in Boston, where Keven had spent a short time making a film. At that time, it was love at first sight for both of them. After working together in Boston, Keven and Maria felt bad while bidding farewell as they had developed a connection within that time. So, they started dating from 1998.

While they were in a relationship, Maria’s father was not much supportive as Keven didn't have a Greek origin. But, the disapproval brought the two lovers even closer as Keven and Maria realized that they had each other’s back no matter what. After being together for almost two decades, Keven took their relationship to a new level when he proposed Maria on live television. Keven popped the question to Maria during the couple's appearance on the Howard Stern Show in 2016 for the promotion of Maria's book, The Every Girl’s Guide to Cooking.

Talking about the wedding plan, Maris had said to People Magazine that it was prepared two weeks before the marriage. As Maria and the producer were planning to cover New Year’s Eve from Times Square, Maria joked about marrying Keven.

Instantly, Maria sent a text about that gossip, not knowing that Keven was about to throw a surprise proposal on Howard Stern’s radio show. As a result, the plan changed, and they got married on Fox’s live New Year’s Eve broadcast at Times Square.

Similarly, Keven and Maria again tied the knot after ten months of their marriage on 6th October 2018 in Greece. On the special day, Maria wore a white floral off-shoulder gown, which was designed by Celia Kritharioti.

Before exchanging their vows, Keven and Maria also did a rehearsal dinner at Museum Restaurant.

Together, Keven and Maria have no children. But, the couple has made plans to welcome kids through surrogacy.

For now, the husband-wife duo has three dogs in their family.

Who Is Keven's Wife Maria Menounos?

Keven’s wife Maria is an actress famous for appearing in the drama One Tree Hill (2003) and the movie, Fantastic Four (2005).

Some Unknown Facts About Her: Maria Menounos Complete Info On Her

Previously, Maria worked as a correspondent for Channel One News and Entertainment Tonight. Also, she co-hosted some of the episodes of a show called Today.

According to Celebrity Net Worth, Maria has a total net worth of $9 million, which is fueled via her profession as an actor, host, and reporter.

The TV producer has piled up a total net worth of $10 million, as per Celebrity Net Worth.

Keven was born on 18th November 1967 in Massachusetts. He attended Saint Anselm College and specialized in History.