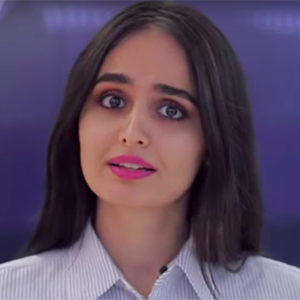 Lana Rose is a familiar name on the social media platforms where she became the sensation for her extravagant lifestyle. She is a vlogger and an aspiring musician with her music videos like Boss Up, Gucci Gucci, and Don't Let Me Fall.

She has sponsored various cosmetic brands, and in late-March 2019, she showcased the new leading smartphone, Huawei P30 Series. She has racked 1.3 million followers on Instagram, and her YouTube channel has more than 1.5 million subscribers.

Lana and her sibling brother Mo Vlogs grew up with their parents Esmail Beiraghdary and Nadereh Samimi Aka Naddia in Dubai. Her brother Mo Vlogs, whose real name is Mohamed Beiraghdary, is an internet personality who created the gaming channel Hitspeko in 2011.

During their childhood, Lana and her brother Mo packed up their bags and moved to London to pursue their education. Their mother Nadereh also went to London with them. It was August 2015 when they returned to Dubai but the family no longer lived with their father, Esmail. In one of the YouTube videos in November 2018, Lana's brother Mo explained that even though their father is alive, he is no longer part of their family.

Though the siblings no longer live with their father, they are close to their mother, Nazareth. The social media starlet took her Instagram in January 2019 and flaunted the family moment showcasing the 10-year challenge. Lana Rose with her mother Nadereh Samimi Aka Naddia and her brother Mohamed Beiraghdary (Photo: Instagram)

In contrary to her family talks, Lana is a private person who is yet to get married. Her small personal life details mostly hint that she doesn't have a husband. While many would think that Lana may have a boyfriend, this lady has still not glimpsed about her affair on social media.

In fact, during the recent Valentine in February 2019, she surprised her fans with what seems to be like a dating video but later pulled the shenanigans as she advertised the smartphone, Huawei Inova 4.

Find About Lana Rose Net Worth!

Lana, age 29, is one of the social media sensations who derives the prominent part of the net worth from her YouTube revenues and Instagram endorsement. According to Social Blade, her self-titled YouTube channel's estimated earnings range between the amount of $794 to $12.7K monthly and $9.5K to $152.5K yearly. She recieved the Golden Play Button from YouTube in June 2018.

Lana Rose was born in Dubai, the United Arab Emirates in 1989. The Instagram sensation has her birthday on 21 September. Her real name is Parisa Beiraghdary and follows the Muslim religion. Her birth sign is Pisces, and her nationality is Emirati. Lana has a mixed ethnicity (Persian, Iranian, and possibly others).

She stands shorter than her brother Mohamed Beiraghdary whose height is 5 feet 9 inches (1.75 m). Her reported weight is 56 kg (123 lbs). As per wiki, the internet personality loves oil painting and has a separate room filled with arts.