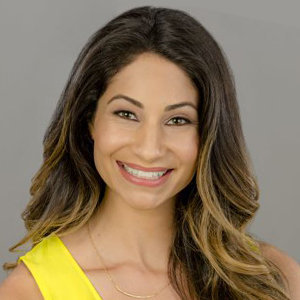 The presenter of Hallmark Channel's show Home and Family, Larissa Wohl, has also been an advocate against animal brutality.

For motivating and encouraging people to foster dozens of animals via her show, she has been nominated for the Emmy Award three times.

Prior to working at Hallmark, Larissa served at various networks as a reporter, including NBC, ABC, and Fox 5.

Moreover, the TV personality is also known for working on Dancing with the Stars (2005) as a production team member.

Larissa first mentioned dating a boyfriend via tweet in 2009.

However, it took nearly a year for her to reveal her boyfriend's name as Alec Shankman, which she did through a Twitter post on 4 August 2010. The couple was actively dating until July 2013. However, after the date, Larissa and her boyfriend have kept their relationship low-key.

Larissa, who holds an American nationality, was born on 17 July in Calabasas, California.

She was raised by her English mother, Elizabeth Wohl, and father, Alan. Larissa’s mother- who passed away in 2006- worked for an organization named Ovarian Cancer Coalition. Elizabeth even inspired Larissa to love animals and encouraged her to adopt from shelters instead of buying.

While growing up, Larissa attended Calabasas High School. Later, she enrolled at the San Francisco State University. During her days at the university, she learned more about animal-welfare issues.

After graduating from college, Larissa began working as a morning traffic anchor and live field reporter for Hallmark in Tucson, Arizona. While she was working for the channel, she became a go-to reporter and covered numerous stories, including entertainment and community events.

Later, she joined the ABC affiliate's Bakersfield, California studio to anchor and produce.

Soon after that, Larissa moved to Fox 5 in San Diego, California- where she worked as a freelance reporter and weather anchor. Also, she hosted and produced the Scripps’s produced show, The List.

Eventually, she produced Home and Family, which is broadcasted on Hallmark Channel.