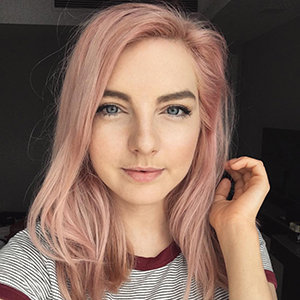 YouTube star and a gamer, Elizabeth Dwyer rose to the stardom by her YouTube name LDShadowLady. She began her gaming career with her desire to escape away from reality after her mother became an alcoholic.

Known for Minecraft series entitled Shadowcraft, LDShadowLady amassed immense success and fortunes through her channel along with over 4.5 million subscribers.  With the series of gaming tutors, she mainly focuses on the clips from Call of Duty games.

LDShadowLady, whose real name is Elizabeth Dwyer enjoys the blissful relationship with her boyfriend-turned-fiancé, Joel SmallishBeans, who is popular for his YouTube videos of Minecraft gaming sessions.

The lovebirds first met in the Game Fest Expo in September 2011. Afterward, they held the hand of friendship and soon turned the bond of friend into a dating relationship in 2012.

LDShadowLady and her boyfriend Joel maintained a smooth blossoming affair for over a half decade and eventually, they got engaged on 6 November 2017. While the couple went off for the trip in the Peak District, North England, Joel surprised his lady with an engagement ring and proposed her to marry him and be the part of his life. It's been more than a year the couple has been engaged, and LDShadow and his sweetheart already has thought to get married soon. On 29 April 2019, she shared a picture where she mentioned herself as a 'bride to be.'

As of now, LDShadoLady savors the wonderful lifestyle with her fiancé, Joel, but they are not married.

Know About LDShadow's Net Worth

LDShadow, age 26, accumulates her net worth from her career as a YouTuber. She created her YouTube channel, LDShadowLady on 9 January 2010 through which she garnered the immense fortunes and fame. As per Socialblade, LDShadowLady, which has over 4,577,218 subscribers, summons the median income ranging between $5K and $79.5K per month that help her to make the annual YouTube revenue from $59.6K to $954.1K.

Apart from YouTubing, LDShadowLady is one of the members of Pixel Pact and is also known for her quirky Minecraft series entitled Shadowcraft. She features several games on her YouTube Channel.

You Also Need To See This: Lee Corso Salary, Net Worth, Health, Son

LDShadowLady was born in 1992, in England, and celebrates her birthday on 7 October. She was grown up by parents, who were a doctor and a nurse by their profession. In her family, she has an only sibling, a sister, Maddie. During her young days, her mother was addicted to alcohol that led LDShadowLady to start gaming to escape away from reality.

After completing high school education, she enrolled at Liverpool John Moores University, where she garnered the Upper Second Class degree in Computer Animation and Visualization in 2015.

LDShadowLady belongs to the white ethnicity and holds a British nationality. Her body measurements include a height of 5 feet and 3 inches tall (1.60 meters) and a weight of 48 kg (106 lbs).