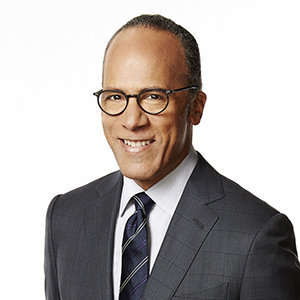 From commencing a career as a disc jockey for a radio station to covering wars in Iraq and Afghanistan, Lester Holt has contributed a lot in the field of journalism. The African-American journalist started his broadcasting career with CBS and covered several national and international stories working with The History Channel and the SyFy channel.

Currently, Lester is a news anchor for NBC Nightly News. Along with journalism, He has also appeared in the TV shows like Law & Order: Special Victims Unit and 30 Rock.

Find About Lester Holt's Salary And Net Worth

Lester is relishing the hefty net worth of $12 million from his career as an American journalist. According to Celebrity Net Worth, he has drawn an annual salary of $4 million from his TV broadcasting. He became the first African-American anchor of NBC to host a weekday network Nightly News since June 2015.

In August 2017, the California native sold his Manhattan apartment for a whopping $6.4 million. He bought the sprawling house for $3.322 million back in 2007. The luxurious condo located in the stylish Flatiron NoMad area consists of three-bedroom, two-and-a-half-bathroom featuring 11-foot tall ceilings.

Nightly News anchor Lester Holt, age 60, has been savoring a blissful married life with Carol Hagen-Hold since 1982. His wife Carol is a New York-based licensed real estate salesperson, who loves modern design and architecture. She worked as a real estate agent in several parts of the United States like Seattle, Los Angeles, Chicago, and Manhattan.

Lester and his spouse met in 1980 at a plane flight. Two years after their meeting, the couple drifted their romances into a wedding on 8 May 1982. Since then, the couple has exceeded more than 36 years of marriage.

During Lester's June 2015 interview with Extra TV, he revealed that the secret of their strong marital relationship is their laughter. The former host of WBBM Channel 2 said:

We laugh a lot, we really do. I can be silly, she can be sillier. We just laugh through things and we know that everything, tough times will be a story at some point, and boy have I put her through some tough times with this job. I love her to death, she’s has been so wonderful, she knows this job is going to bring a lot of late-night phone calls, but she’s there for me and that means an awful lot.

Together, Lester and his wife Carol have two children, namely Stefan Holt and Cameron Holt. Their son Cameron interned with CNBC and currently works in the financial industry. Lester Holt with his wife Carol Hagen-Hold and their two sons (Photo: heavy.com)

Likewise, Stefan has followed his father's footstep and is a news anchor for WNBC-TV. Lester and his wife Carol, who are proud of their son's accomplishment in their respective fields reside in Downtown Manhattan.

Lester Holt was born in Marin County, California on 8 March 1959 to Lester D. Holt Sr and June DeRozario Holt. His father Lester is African-American and his mother June's family has a root towards countries including India, Scotland, and Jamaica. The news anchor is known for his nickname as Iron Pants due to his unwillingness to leave the anchor chair during the breaking news.

Lester's ethnicity is mixed (African-American, Jamaican, Scottish, English, and Indian). He, who has low-keyed his weight, stands at the height is 1.88 meters (6 feet 2 inches). As per wiki, the former host of WBBM Channel 2, Lester likes to play the bass guitar.

As for his higher studies, the journalist attended California State University.