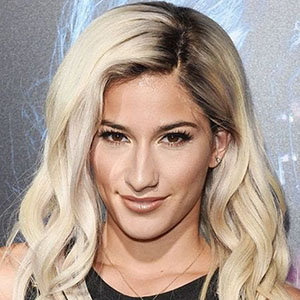 YouTuber star, Lexy Panterra is the professional dancer and singer, praised for her twerking moves. She even had teamed up with Playboy Magazine to perform in the Twerking Through History. She is the founder of the LexTwerkOut, an exercise program that utilizes twerking.

Lexy rose to the prominence through her singles called Supa Dupa and Neon. She has released an album Lit Remixes - EP along with six dance/electronic tracks in 2016. She is also known for her stylish clothes which she has named 'Lexy's LexTwerkOut Leggings.'

Lexy Panterra's Ex-Boyfriend Is Son Of David Beckham; Is She Married?

Lexy Panterra, age 29, was in a relationship with a photographer and an elder son of David Beckham, Brooklyn Beckham. The pair met each other at Coachella during early 2017. However, they kept their relationship to a friendship until May 2018.

The romantic flair of Lexy and Brooklyn surfaced on the Internet for the first time in May 2018. As confirmed by the US Weekly, the pair had a whirlwind romance in April as they were spotted while having dinner at Catch NYC. The source confirmed that the love-duo were enjoying the dinner date holding one another hands. And later that day, Lexy and Brooklyn savored their romantic fling with a dance. However, three months later, the news about Lexy's break up with her boyfriend Brooklyn ruptured the heart of their many fans. With the weeks of whirlwind love-story, Lexy officially separated from her beau citing the reason as 'problems in a long-distance relationship.' As per the Entertainment Tonight:

'Lexy recently broke up with Brooklyn and the long distance was definitely a factor.'

Lexy's ex-boyfriend, Brooklyn moved on from their failed relationship and started dating a model Hana Cross. The glimpses of his affair with Hana was noticeable on their social media posts. In the case of Lexy, it seemed like she was still in search of her perfect better-half.

Although, in the course of her on-off relationship with Brooklyn, she was again spotted with Brooklyn partying at a London club and sharing an affectionate kiss. After enjoying each other's company in the club Brooklyn and Lexy were reported of leaving the club together.

Brooklyn was reported of recently breaking up with his model girlfriend, Hana Cross. His ex-girlfriend Hana had become pretty close with his fashion designer mother both personally and professionally.

Despite things heating up between the former couple, a source confirmed that the former lovers are not dating. We can only hope to see where their story leads in the future; maybe their fairytale will eventually have a happy ending.

As of now, Lexy is unmarried and has kept her personal life under the wraps. Before dating Brooklyn, she was reportedly in a relationship with Gregg Sulkin.

Who Is Lexy Panterra? All About Her Wiki And Bio

Lexy Panterra is an American twerking dancer and an actress recognized for her amazing dancing and singing skills. Lexy was born to her parents Elizabeth and stuntman Tony Panterra on 22 May 1989 in Sonoma County, California, USA. Her father as being Iranian and belonging to Muslim background changed his last-named from Abshar to Panterra.

Lexy has a height of 5 feet 8 inches (1.73 meters), and her feet size is 7.5 US. Holding American nationality, Lexy belongs to the mixed ethnicity (Iranian and Irish descent). Her real name is Alexis Liela Afshar, as per the wiki. Just at the age of five, she won her first beauty pageant.

As of 2019,  Lexy featured alongside VOILÀ to release her latest track Mamacita. She also worked together with EDM veterans Stafford Brothers and Lil Yachty to release a radio-friendly club track Live Forever. The track is a combination of EDM and hip-hop, which became number 10 most saved single in the Spotify Worldwide Charts.