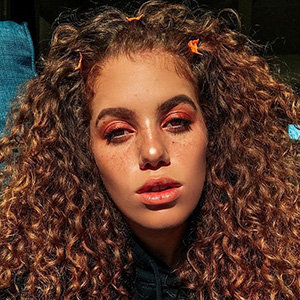 Mahogany Lox is known for her multi-dimensional career progression. She is a singer, YouTube star, and also a DJ, who initially gained popularity as a part of the Magcon tour in 2014.

As a singer, she has released several songs, including Problem, Say You Won't Let Go, Uptown Funk, Shower, and Kiss Me Slow. Apart from that, Mahogany, who peaked the limelight through social media, has amassed 1.4 million followers on her Instagram.

Who Is Mahogany LOX? - Parents, Brother

Mahogany Lox was born on 5 October 1994 in Michigan, the United States, into a family of artists. Her parents, Berry Gordy IV and Valerie Robson, raised her along with her brother Skyler Austen Gordy, who is a rapper and a dancer.

Mahogany's grandfather, Berry Gordy, is prominently known as an American record executive and a producer. Throughout his long career span, he has worked with many music superstars, including Smokey Robinson, Stevie Wonder, The Temptations, Gladys Knight and the Pips, and The Jackson 5.

With such a successful career, grandfather, Berry is estimated to earn the net worth of about $400 million, as per the reports of Celebrity Net Worth (2009).

She started her YouTube channel, Mahogany LOX, back on the 15th of June 2012, which now has amassed the subscribers of more than 575K. She uploads the music videos and also the contents of her daily activities on her channel.

(Note: As per socialblade, Mahogany accumulates the basic earnings ranging around $3.4K - $54.3K per year)

Besides that, Mahogany also owns a merch where she deals with online sales of several clothing products.

A famed YouTube star and singer, Mahogany Lox, has been dating a TV actor, Carlos Esparza, since August 2015. There is not much information about Mahogany's romance initiation with Carlos.

But, their current relationship unquestionably is vivid, as evident on their respective social media posts. Mahogany wished her boyfriend, Mahogany Lox, on the occasion of the third dating anniversary on 13 August 2018. (Photo: Mahogany's Instagram)

Throughout their happy relationship, Mahogany and Carlos also have collaborated in their musical progression. They even released their joint song 'Kiss Me Slow' back in early September 2019.

Discover More: Conor Leslie Wiki, Net Worth, Measurements, Is She Dating or Married?

Concerning her physique, Mahogany Lox stands at the height of 5 feet and 4 inches tall. The 25-year-old YouTube star has curly blonde hair.