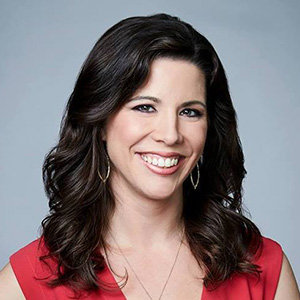 Mary Katharine Ham is an American journalist popularly known for her work in FOX news and CNN. She is a hardworking, and independent women focused on her work and career.

The mother of two lost her husband, who died in a tragic bike accident. After the demise of her spouse, Mary has been through many tough periods in her life but still has managed to look after herself and her family including her daughters.

How Is Mary Coping After The Death Of Her Husband?

Mary Katharine got married to Jake Brewer. The couple shared their wedding vows in April 2011 at Lake Anna in Mineral, Virginia. The couple met for the first time in a Google panel. Mary and Jake were blessed with two daughters, Georgia Brewer born in 2013 and Garnet J. Brewer born in 2015. Everything was going well for Mary and her life partner until bad news blew away all the happiness. Mary's husband, Jake Brewer, lost his life on 20 September 2015, from a horrible bike accident. Jake lost his life in a charity bike race. During that time Mary was pregnant and expecting another daughter. This incident shocked the entire Brewer family including his parents and wife Mary.

After the death of her husband, the family also suffered a financial crisis. They also opened a page named as GoFundMe to raise about $200,000 for her children's education. They got good feedback from the page and were able to raise more than 70 percent of the funds.

Now, Mary is all on her own growing and looking after her two daughters.

What is Mary's Net Worth?

Mary Katharine summons her net worth of $1 Million by working as an American journalist and also a CNN host. Apart from that she also makes some additional money by working as a CNN host where the average salary is estimated to be $67K.

Mary Katharine completed her graduation from Riverside High School back in 1998. After completing her graduation, she began her journalism career by working as a writer in the Richmond County Daily Journal. In the Journal, she worked as a columnist and managing editor. After working for a few years, Mary then joined WMAL to host the show named The Morning Majority.

Mary has also appeared as a guest in on the show and series like The O'Reilly Factor, Red Eye w/ Greg Gutfield, and The View.

As of now, Mary works for an American politically conservative website, print magazine and radio news service named as Townhall Magazine. She has also been part of The Federalist, and after working almost a decade for FOX news, she joined CNN earlier in 2016.

Mary Katharine Ham was born on 5 April 1980 in Montgomery, America but was brought up in Durham, North Carolina. Mary's father is a famous journalist who goes by the name of Jon Ham.

Mary holds American nationality and belongs to American ethnicity. She stands a litter shorter than former American president Barak Obama who stands tall at the height of 1.85 m.