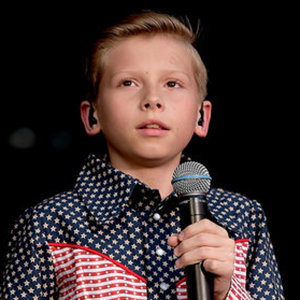 American Country Singer Mason Ramsey allured the attention of the world at the young age after his video 'The Walmart Yodelling Boy' gone viral on the internet. He is famous for his song White Christmas, Lovesick Blues and his debut single Famous (peaked #1 country song on iTunes), which was released in April 2018.

At the tender age of 11, the country singer has signed the record deal with two big companies, Atlantic Records and Big Loud. Besides, he is the heart of over 2.1 million followers on Instagram.

Mason Grew Up With Grandparents; His Siblings

'The Walmart Yodeling Boy' Mason Ramsey, age 12, was just three weeks old when was handed to his grandparents Ernest Ramsey and Frances Ramsey in Golconda, Illinois and grew up with them. His biological parents reportedly reside in Oklahoma. In his family, Mason has an elder sister, who is nine years older than Mason and was born in 1997. Both the siblings were raised in the guardianship of their grandparents.

His grandfather Ernest Ramsey working as a newspaper salesman delivering St. Louis and Evansville newspapers when Hank died on 1 January 1953. He inspired Mason to venture in the country music. Ernest, who listened to the legendary country singer Hank Williams, had a karaoke set in his garage. He taught Mason to sing the songs of Hank.

As for Mason's grandmother Frances, she manages the Instagram account of her grandson. The viral yodeling sensation is pretty much close to his grandparents and feels proud of them. During the Christmas in December 2018, Mason beamed his love toward grandparents in Instagram and wished them Merry Christmas. Back in May 2018, he shared a picture of his grandmother Frances and wished her 'Happy Mother's Day.' Likewise, in June 2018, Mason clicked his picture with his grandfather and wished him 'Fathers Day' labeling that he is the man who raised him.

Know About Mason Ramsey's Net Worth

Mason summons the prominent part of the net worth from his career as an American country singer.

He received a few parts of his income from his YouTube channel. As per Socialblade, his YouTube channel Mason Ramsey estimated earnings ranges from $262 - $4.2K monthly, and $3.1K - $50.3K yearly. The music artist, who garnered fame at the young age once appeared on The Ellen DeGeneres Show, where Walmart announced him $15 thousand college scholarship.

During his music career, Mason has performed on several tours. During his tour at Coachella 2018, he hung around with Justin Bieber, a husband of Hailey Baldwin. On 11 July and 12 July 2019, the young star is set to heat the stage at Country Boom Music Festival 2019 in West Salem and LA Crosse.

Mason Ramsey, who was born in 2006, lights the birthday every year on 16 November. His hometown is in Golconda, Illinois. The country singer is famous for his nickname as 'The Walmart Yodeling Boy.' At the age of seven, Mason sang on a Christmas TV show with American singer-songwriter, Kenny Rogers.

His birth sign of the 12 years old kid is Scorpio, and his height is 1.44 meters. Mason likes country songs and prefers spending time outdoors. Currently, he is attending sixth grade, and during the tours, he takes classes online.