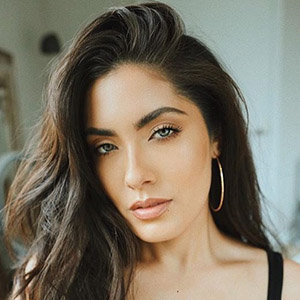 Melissa Alatorre is a Mexican-American makeup artist and a Youtuber. Her self-titled YouTube has 654K subscribers.

Also, she is also a social media influencer with massive 284K followers on Instagram.

Melissa was born on 22 April 1989 in San Diego, California. She has an elder sister, who is known by the name “somewhereyve” on the internet.

After completing her study at San Diego University, Mellisa moved to Hollywood/ Los Angeles and worked as a production assistant on various TV shows. There, she eventually grew interested in makeup and made a decision to switch her profession as a freelance makeup artist.

Melissa has been dating Kyle Liarman since 2013. The couple celebrated their fifth year anniversary in Palm Spring California on 22 January 2018. On the next day on 23 January, Melissa shared a picture of their anniversary and captioned:

Yesterday, Kyle and I celebrated our 5 year anniversary together (with Meeka-choo too, of course!) and today I am still just as in love with him as the day I first laid eyes on him that Sunday back in 2013, at Pink Taco on Sunset Blvd. in LA ... keeping it classy since day one.  love you @kylelierman The pair had first met at Pink Taco on Sunset Blvd in Los Angeles in 2013. Soon, they started featuring each other on their social media as soon as they started dating- Kyle first shared the picture of Mellisa on 22 July 2013.

Mellisa, as a beauty guru, is associated with human beauty. She is concerned about her makeup and hair. As a result, she shares every bit of makeup tips and tricks as well as hair care routines via her vlog and videos.

She educates her readers on the difference between many makeup products and contributes her passion and talents to the aspiring world.