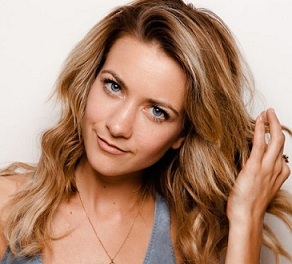 If you are a TV star, then you have fan followings that care about your professional as well as personal lives. Every day we find gossips regarding the celebrities dating affairs and Meredith Hagner seem to one of those who is unable to avoid being detected by a camera. She is an actress best known for her acts as Liberty Ciccone in the CBS daytime soap opera As the World Turns along with the role of a lovable narcissist Portia in the TBS sitcom Search party.

Hagner debuted in the CBS daytime soap opera AS the World Turns in 2008, as Liberty Ciccone. It even earned her a nomination for Daytime Emmy Award for Outstanding Younger Actress in a Drama Series. The actress starred in the FX short-lived 2011 drama Light Out. She has been cast as the lead on The CW Pilot Awakening, but it was not picked up to series. Hagner began starring as Amy Jordan in 2012, in the TBS comedy series Men at Work that continued for three seasons.

She returned to network television in TBS dark comedy “Search Party” in 2016. She plays as the accidentally investigative sidekick, Portia Davenport. Her role of the shallow hipster actress was named by Rolling Stone magazine as one of the 20 Best TV characters in 2016.

How much is Meredith’s Net Worth?

The 30 years old actress, Meredith Hagner enjoys an estimated net worth of $1.7 million. In her own words, at the day she joined 'As The World Turns' as Liberty Ciccone, she had $10 in her bank account. Her acting career has been proving to be very fruitful as she has been able to maintain her net worth in millions of dollars.

Who is Meredith’s Boyfriend?

Now the reason Meredith can’t stay from media recently is her romantic relationship with a former hockey player and an upcoming actor, Wyatt Russell. Meredith and Wyatt met on the set during the shooting of the Folk Hero & Funny Guy. Soon after they met, they started dating. One interesting fact about her 29-year-old beau, Wyatt Russell is that he is the son of Private Benjamin’s star Goldie Hawn and actor Kurt Russell. According to the sources, Meredith along with her boyfriend Wyatt and his famous parents were spotted in Hawaii to attend Maui film festival.

As the couple has been seeing each other for a while, it seems that they have been able to maintain a good relationship and will continue to do so. Well, there is no any official announcement as if Meredith and Wyatt will get married or not. But if they are going to be husband-wife in the future, they will definitely get the blessings from their parents, as they have already spent quality time with their families.

Meredith took it to her Instagram and revealed that she was engaged to Wyatt Russell on December 2018 in Snowmass Village, Colorado. The actress also revealed that the love of her dang life proposed to her. She even stated that he is the best guy in the world. She posted a photo of the massive round diamond halo engagement ring. The news of their engagement was made public months after the lovebird bought a house together worth $1.7 million.

As of now, the couple is set to sell their Spanish-style home in Sherman Oaks. The home is worth $1.829 million.

Based on some wiki sites, Meredith Hagner was born on May 31, 1987, Chapel Hill, North California, U.S. Meredith Hagner and her sister Kerry were raised by parents Karen and Ronald Hagner. She went to Chapel Hill High School and graduated in 2005. She attended Boston Conservatory, Boston for a year and moved to New York City after being offered acting opportunities. She belongs to the white ethnicity and has a decent height of 5 feet and 6 inches.