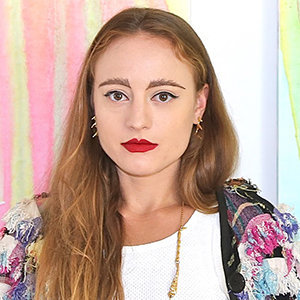 A young girl inspired by infinite galaxies, our connections with the planets and the fact we are made of the stars, Millie Brown is a performing artist who uses her body as a medium of language. The artist wants to leave an imprint of herself in the world using this form of art.

Millie is renowned for her colorful act as a performance artist where she “vomits rainbows.” She has collaborated with many famous artists including Lady Gaga.

Career As An Artist

Brown started her career as a performance artist at the age of 17. She and a group of creative friends formed an art collective named !WOWOW! Later they occupied an old building in London and turned it into their own utopia. She started collaborating her works with artists around her. When her group was invited to perform in Berlin, she decided to use her body to paint. She swallowed dyed milk and vomited it back to create a rainbow effect. She has now mastered other forms of performance art. "Rainbow Body Performance" was inspired by Tibetian Buddhist Philosophy where the third party's perspective observes enlightenment. For the performance, she was suspended by the ceiling, and hundreds of crystal prisms were dangling by her body and limbs, this created the refraction of light resulting in creating rainbow light.

In an interview, she mentioned everything around her inspired to create art. The creative people and collaborators that surround her influence her the most. She says that having them around her is very important because she believes creativity attracts creativity.

Millie has worked with many famous artists including Lady Gaga, Nick Knight, and Ruth Hogben. She has performed in different parts of the world. After her performance with Lady Gaga with vomit act, she was criticized for glamorizing bulimia. However, she defended herself and said To Guardian on 24 March 2014 that,

"I'm using my body to create something beautiful, I think it's misunderstood by a lot of people. But it really doesn't have anything to do with eating disorders. If I was male, [no one would make] such a massive association."

What Is The Net Worth Of Millie?

The artist summons her net worth from her performance arts and her paintings on canvas. According to sources, the average base salary of an artist is $53,282 per annum, and average total compensation is $54,535. However, she is associated with top celebrities like Lady Gaga and Nick Knight, so she probably accumulates fortunes in millions of dollar.

But in an interview, she said that taking art as a career and making money out of it is difficult. It is not easy to take the things you love and create income out of it.

For her, she sometimes comes up with very expensive ideas but does not think about such ideas as a business. Art is a business, but she keeps herself away from those heartless business minded souls.

The creative soul, Millie was born in 1986 and celebrates her birthday on 12th of October every year, as per wiki. She was born in London and stands a few inches shorter than Lady Gaga whose height is 1.55 meters (5feet).

Her parents raised her in a creative surrounding which made the platform for her to hone her artistic skill. As a child, she used to take her body as a canvas and would paint all over it.