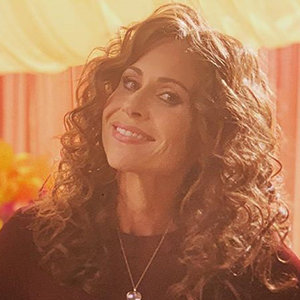 Minnie Driver is popularly recognized for her lead role as Maya DiMeo in the TV Series Speechless. With the experience of almost three decades, she has piled up the notoriety and immense fortunes.

Her career took the route of success in the Entertainment industry when he got the role in the 1995's movie Circle of Friends. Following the excellent reviews, she got to play in a few more movies  GoldenEye, Sleepers and Grosse Pointe Blank.

A mother of a son, Minnie Driver, was involved in a couple of dating relationships.

She was in a relationship with her actor boyfriend, Josh Brolin. With years of togetherness, the pair engaged in April 2001. But, they couldn't handle the ups and downs so they broke off their engagement before getting married in October 2001. It was reported that the reason behind their separation was Josh's step-mother, who tried to take charge of her wedding.

Minnie has a son named Henry Story Driver from her relationship with The Riches's writer, Timothy J Lea. She announced her pregnancy in 2008 but was keeping the identity of the baby daddy under the radar. Meanwhile, on 21 February 2012, she spilled the beans about her beau. With The Hollywood Reporter Magazine, she told

“We weren’t together and he wasn’t directly in the business, so I chose to protect him and not have a rain of publicity,”

But the couple now has separated from each other.

Currently, Minnie is in a relationship with her beau, Neville Wakefield. The pair has been in a relationship since 2014. On 15 March 2017, the tabloid newspaper discovered something interesting about Neville's romantic love life. The twosome was spotted together at Maura Cafe inside Fred Segal in West Hollywood. Daily Mail reported that she was wearing an elegant ring on her finger and hinted as if the pair were already married.

The couple has not confirmed as if they now are offically a husband and wife.

Matt Damon was also in a relationship with Matt Damon, who is a husband of Luciana Barroso. She even starred alongside him in the Oscar-winning 1997 movie Good Will Hunting.

All About Minnie Driver's Bio And Net Worth

Minnie Driver was born as Amelia Fiona J. Driver on 31 January 1970 in Middlesex Hospital, London, England, UK. She stands at the height of 5' 10" (1.78 meters), as per the wiki. Her parents, mother Gaynor Churchward,  a designer, and former couture model, and her father, Charles Ronald "Ronnie" Driver, a businessman raised her alongside her sister, Kate Driver.

Having curly hairstyles, Minnie prefers not to wear makeup during her free time. But she loves to participate in #MakeupFreeMonday. Minnie began wearing makeup at the age of 25 when she entered the movie industry.

She earned the income from her movies as well as longtime running TV series including, Will & Grace, The Riches, About a Boy. Currently, she is portraying the lead role of Maya DiMeo  in Speechless alongside Logan Shroyer, Kayla Maisonet,
Jake Brennan, and Hailie Jade.

With her acting credits in numerous movies and TV shows, she has accumulated the net worth of $20 Million.  In October 2014, she kept the Los Angeles-based house for a sale at a price $1,495,000.