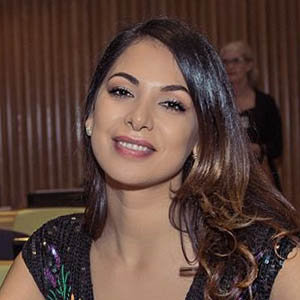 Israeli actress Moran Atias, who was discovered as a model by Italian designer Roberto Cavalli, had few dating affairs in the past but her relationships couldn't last long. But has she fallen in love again after finding a right man?

The model-turned-actress is popular for portraying the character of Monika in the 2013 film, Third Person. She made her debut in the Israeli television series, Out of Focus, at the age of fifteen and started her professional acting career. Moran also appeared in the fashion show for Italian designer Roberto Cavalli. She is also known for her role in the TV series 'Tyrant' and the movie 'The Next Three Days.'

Multiple Dating Affair In The Past; Dating Anyone Now?

Moran was dating former footballer Adrian Mutu in 2003. While speaking with Evening Standard magazine in October 2003, Adrian revealed that the duo started dating each other after Moran started sending him an anonymous text message. Moran and her boyfriend Adrian, however, ended their relationship just two months after they began dating.

Later, in January 2004, the Tyrant actress was rumored to be dating Italian businessman Flavio Briatore. But she denied the rumor saying that Flavio was nothing more than a pal. Meanwhile, she confirmed that Adrian was her only first serious boyfriend she had after her split with the anonymous English guy.

The Israeli actress was single till September 2009. In an interview with Muscle And Fitness magazine, she told that she was devoted to her profession, but as soon as she finds a right guy, she will work for a deep relationship with him.

However, the Third Person's actress surprised her fans on Valentine's Day of 2016 by sharing a picture of her being shocked after seeing a huge bouquet of red roses. Moran, however, made sure to keep the details of the person who gifted her that bouquet private.

Furthermore, on 10 August 2016, she shared a selfie with Oliver Rousteing on Instagram and mentioned him as "Summer Love." Nevertheless, Moran hasn't opened up whether she was actually in a dating relationship with him or not. As of now, she is yet to get married. Though she is not married in real life, she is bound in a marital relationship on screen. Moran has a husband named Jamal Al-Fayeed, portrayed by Ashraf Brahm, in the American political drama television series Tyrant.

Moran Atias was born on 9 April 1981 in Haifa, Israel to Jewish Moroccan parents. Born to mother Yael Atias, she grew up along with her sister named Shani Atias, who appeared in movie Color Red.

She stands at the height of 5 feet 9 inches (1.75 meters), as per the wiki. Moran Atias, who holds Israeli nationality, belongs to Moroccan Jewish ethnicity. She is fluent in speaking Hebrew, English, and Italian. The 37-year-old actress went to University in California, Los Angeles, California.