A decision to become a mother and take the huge responsibility for a teen is itself challenging, but to raise the daughter as a single mother is a whole new level. However, Naomi Konickova not only decided to welcome her child into this world but also took the huge risk to raise a daughter on her own. She is makeup artist by profession who became a media personality after appearing on MTV’s hit show, ‘Teen Mom UK.'

Opts to Take a Break from Teen Mom UK!

Naomi Knonickova along with four other teen moms Amber Butler, 19, Chloe Patton, 18, Megan Salmon Ferrari, 18, and Mia Boardman, 20 stormed the rating of ‘Teen Mom UK’ which premiered on 2nd November 2016. The show focused on the life and struggle of teen to keep up.

In June 2017, Naomi, who appeared with her 2-year old daughter Kyanna, confirmed that she decided to take a break from the show to concentrate her career and future of her daughter.

While Speaking to MTV, she said that:

“I wanted to take a break from Teen Mom UK series two because I really feel like I need to focus on my career and really try to build a future for Kyanna”.

Her Parents Reaction to Her Pregnancy!

Naomi revealed that her mother already knew she was pregnant and was also present when she and Raphael took the pregnancy test. Her mother, who knew all about their dating, then smacked the couple with the shoes.

She was hesitant about her daughter's decision to raise the child in young age and labeled the decision crazy. But as Naomi went through the pregnancy, she eventually decided to support her daughter.

The Relationship in Ugly Turns with Boyfriend Raphael!

A relationship doesn't always go as we planned and it headed south from Naomi when she found out that the father of her child was still in contact with his ex-girlfriend, Innis. She came to light about her boyfriend’s betrayal after Innis sent her the screen shots of messages.

After the incident, the on and off relationship finally came to an end, and she claimed that she tried to salvage the relationship, but then-boyfriend didn’t respond. 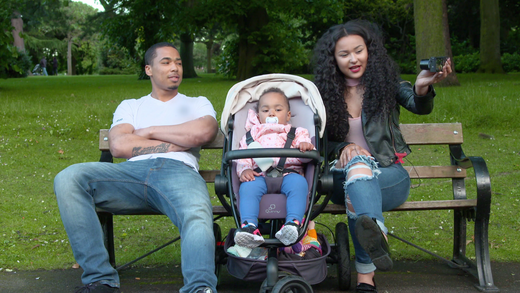 The Sun reported that Raphael was reluctant to help her with daughter Kyanna and she had to go through a lot to manage the time for her makeup career.

Even after being a mother at such a tender age, she didn’t give up her dream of becoming a professional make-up artist. In the show, she took training to become a make-up artist and made her aspirations clear to achieve more in her life.

According to the wiki sources, Naomi Konickova took birth outside of London on 29th April 1997 and currently ages 20. The makeup artist holds British nationality and belongs to mixed ethnicity. She possesses a decent height and maintains a healthy body shape.