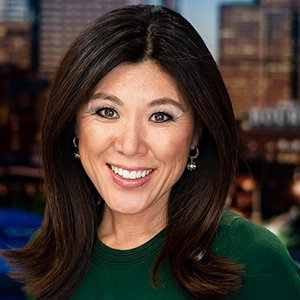 Nydia Han, who is dedicated to exposing scams and encouraging the businesses and agencies to do the right things, trailed her path in the field of media with her brilliant journalism skills. The first generation Korean-American lady hopes to inspire and know the uniqueness of the United States.

With her enthusiasm, the Emmy award-winning journalist is working at 6abc as consumer investigate reporter. She covers the news as an Action News anchor and has also served with KTRK-TV, KOCO-TV, and KIFI-TV.

6abc's consumer investigative reporter Nydia Han moved to Philadelphia in 2002 where she figured that her time was limited. However, her romantic encounter with the physician Dennis Reilly led her to stay in Philadelphia.

The couple soon found love in each other, and after dating for years, she and Dennis shared the wedding vows on 4 September 2010 in Napa Valley, California.

Together, they are parents of their two adorable kids; Sabine Reilly and Harris Han Reilly. Their first child, a daughter named Sabine was born in April 2012. Later on 4 April 2014, the lovebirds welcomed their baby number two, Harris.

During her interview with 6abc in May 2014, Nydia gushed that she and her husband Dennis have felt blessed to have a baby girl and boy and their family feels complete. The journalist affirmed that Sabine was excited to have a little brother and loves her so much. Nydia Han and her husband, Dennis Reilly, on their wedding on 4 September 2010 in Napa Valley, California (Photo: 6abc.com)

During their eighth marriage anniversary in September 2018, she and her physician husband celebrated their big day in New York City. Dennis took her to the concert of English singer, Ed Sheeran. Though she is an early bird on social media, she defines Dennis somehow hesitates to share pictures on social media. Nydia Han with her husband, Dennis Reilly, and their two adorable kids on Christmas in December 2018 (Photo: Instagram)

The family of four, who are residing in Philadelphia, beamed during Christmas in December 2018. Nydia took her social media to flaunt the picture of her adorable family and wished Merry Christmas to her followers.

How Much Is Nydia Han's Salary?

Nydia, age 45, is an Emmy-winning journalist who is working at 6abc as consumer investigate reporter and troubleshooter. As per Paysa.com, the employees of 6abc earn the average salary of $78,593 per year and their annual income range from $61,453 to $91,938.

You May Like: Jovita Moore Age, Married, Husband, Divorce, Salary, Net Worth

The Koran-American lady is also the co-anchor of Action News Sunday mornings and a creator of documentary series, #ThisIsAmerica.

Nydia Han, who grew up in Southern California, was born in 1973. She celebrates her birthday on the 22nd of November. On the occasion of her birthday in 2017, meteorologist Melissa Magee‏ wished her via Twitter.

Talking about her parents, Nydia grew up as an only child and likes to define herself as a 'daddy's girl.' Nydia often shares the snapshots with her old pops on social media. Her nationality is American and carries Korean-American ethnicity.

The 6abc's Consumer Investigative Reporter stands lower than 5' 5" of height. Nydia completed her BSc in Journalism from the Medill School of Journalism at Northwestern University. While attending her bachelor studies, she focused on International Studies. As per wiki, Nydia is fluent in Korean and graduated from Yonsei University in Seoul, Korea.