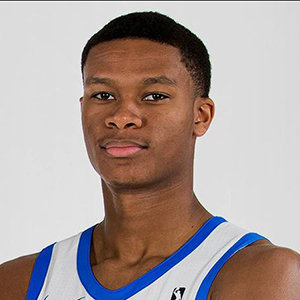 The Basketball champion PJ Dozier has an esteemed record of playing for several prominent basketball teams, including Oklahoma City Thunder, Boston Celtics, and Maine Red Claws. It is his superior stints and excellent scores that led him to attract many distinguished teams as well as his enormous numbers of fans.

The former star of Boston Celtics, PJ Dozier, although only played for six NBA games while in Boston Celtics but became successful in achieving the prestigious title of G League All-Star while collaborating with the Maine Red Claws. He had scored 21.1 points, 6.6 rebounds, and 6.7 assists per game.

Who Is PJ Dozier Dating?

The 23-years-old basketball player, PJ Dozier, who is way ahead in approaching basketball’s ball, seems to be behind when it comes to approaching female friends. Indeed, the star PJ is single based on his Facebook bio.

Not only is he single at present, but also he has never publicized his girlfriend or his dating life before. Therefore, it wouldn’t be wrong to suspect that the young basketball solitaire has never tasted the flavor of romance.

Concerning his isolated relationship status, PJ seems to be entirely dedicated and determined on his career, as of now, and not wasting his formative years to some random girls, which is the more attractive component of PJ.

Hopefully, once he reaches his pinnacle period, he will undoubtedly think about mingling his single life sooner.

PJ, aka Perry, garnered his name from his father, Perry Dozier Sr., a former South Carolina forward. His mother’s name is Theresa, who is also a cancer survivor.

Besides his divorced parents, he has a twin brother Terry and sister Asia who are also associated with an athlete. All of them are equally credible for PJ’s success at present. PJ with his mother, Theresa, while she was fighting with cancer in 2014. (Photo: Twitter)

PJ’s father Perry had admitted PJ into rec leagues and area tournaments faking his age two years older. This way, PJ could compete with older and bigger boys, and would still stand among all of them.

Later growing-up, he was coached by his father, uncle Terry and his twin brother. But neither of them tasked him harder than his big sister Asia, a four-star prospect. She would drag her brother into the courts and the endless games until their mother came to rescue PJ.

While Asia was training her brother, on the other side, she was also remarking an ethical symbol in her future career. She won the two-state titles at South Carolina’s Spring Valley High School. Asia became her state’s Gatorade Player of the Year and Miss Basketball along with the latest Dozier to grasp a scholarship to South Carolina.

As of now, PJ 's sister has hired as first girls basketball coach Legion Collegiate Academy according to the tweet of Mike Gillespie, the director of ABC Columbia.

PJ was born on 25 October 1996 in Columbia, South Carolina. His parents raised him alongside his siblings around the court of basketball.

For the education, he got enrolled at Spring Valley High School, where he was titled the best fifth-grader in the nation at the age of 10. Later after high school, he opted for South Carolina University for his college degree. There he was coached by coach Frank Martin, who is also credited for PJ’s enormous peak career.

You Might Find This Interesting: Taveeta Szymanowicz Bio, Dating, Parents, Net Worth