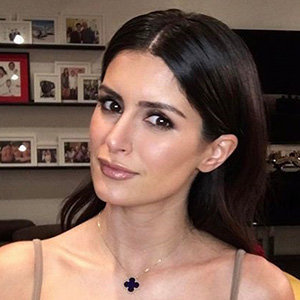 Rich Kids of Beverly Hills' star Roxy Sowlaty is on the edge of sharing the wedding. She has brought goosebumps to her fans after her engagement with Vice Chairman of House Of Bijan surfaced in an Instagram video.

The interior designer, Roxy Sowlaty, whose enthusiasm for designing, aspire her to launch her own clothing line at a young age. Her appearances in a popular show including Rich Kids of Beverly Hills and Fortune Cookies made her a star.

Roxy Sowlaty is getting married!

The Fortune Cookies' star Roxy and her boyfriend, Nicolas Bijan, who is the Vice Chairman of House Of Bijan, is now officially engaged to each other on 30 October 2018. She accepted the surprising proposal by her boyfriend in Paris saying ‘Yes.’

Roxy’s boyfriend-turned-fiancé gushed about his ‘Surprise Proposal’ in an Instagram’s video, where he was about to surprised Roxy. Before he proposed her, he showed an elegant 8-carat diamond ring and said she has no idea that he was going down on one knee.

After then, Nicolas fled to the place where his girlfriend was, and his ultimate appearance in the love lock bridge at Paris completely blew her mind that compelled her to ask what he was doing here. Nicolas proposed her with a diamond engagement ring to get married. Rich Kids of Beverly Hills’ star immediately accepted the proposal. Roxy Sowlaty gets surprised with her mouth agape expression, looking at the engagement ring on 30 October 2018. (Photo: Instagram)

After the engagement, the pair were quick to gush about the romantic engagement fling with Instagram’s fans and followers. American designer shared the memory from her engagement in an Instagram posting photo of the proposal and displayed her glee in the caption. Roxy told that she still couldn’t believe that she and her sweetheart are engaged now.

Her engagement came just two years after she told that she was very focused on her career rather than having a boyfriend. But, she eventually found love in Pepperdine University graduate Nicolas. The couple often savors their time going for a tour in a different place. In March 2018, they went to Doha, Qatar to spend their weekend.

How Much Is Roxy Sowlaty’s Net Worth?

Roxy, who is a designer and reality star, has grasped the net worth of $600 Thousand. She earned the prominent part of the net worth as being the designer. The designing enthusiast started her career by launching their clothing line RoxTar, at the age of 16, alongside her sister named Tara.

RoxTar’s owner earned the breakthrough after she appeared in the reality show Rich Kids of Beverly Hills. Celebrity including Morgan Stewart and Dorothy Wang also has made their appearance in the Rich Kids of Beverly Hills. Later in 2016, Roxy appeared in the show Fortune Cookie. As of 2018, Roxy is working on her upcoming documentary untitled Vince Spinnato's documentary. Roxy currently is working on her interior design firm.

Born on 21 May 1988, the Californian designer, Roxy Sowlaty, age 30, was born as Roxana Sowlaty. She is few inches shorter than her fiancé but complementing heights.

Her parents, father Sam Sowlaty, who runs printing company Acuprint and mother, taught her to struggle against the challenges. At the end of season 1 in Rich Kids of Beverly Hills, they even cut off her credit card supply to let her face the extreme challenge.

Roxy completed her bachelor’s degree in Business from the University of Southern California's Marshall School of business. Later, she went to Parson's School of Design in New York, where she received master’s in Interior Design, as per the wiki.