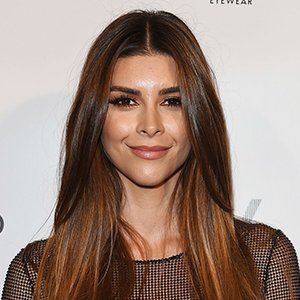 When you’re genuinely in love with someone, then the age gap does not become a barrier. Shiva Safai, the celebrity star of ‘Second Wives Club’ stunned everyone when she announced her engagement with Mogul estate business empire Mohammed Hadid. Although her fans criticized their affair, she didn’t look back and has been enjoying a beautiful relationship with the fiancée despite the thirty-three years difference in their age.

Shiva Safai got engaged to her fiancé, Mohammed Hadid in 2016 after dating each other for around three years. The couple does receive a lot of criticism considering their thirty-three years age difference, but none of it seems to have affected them. Shiva, who has fallen head over heels in love with Hadid, shared her affection towards him with Eonline. She said,

“The age difference between me and Mohamed is 33 years. But I don't feel the age difference at all. I'm an old soul and he's young at heart. He brought back the sparkle I was missing in my eyes and he really, really put the broken pieces back together”

The couple hasn’t exchanged the wedding vows until now, but it will surely be a grand affair when they decide to take a further step. Moreover, Shiva has already become familiar to his entire family including his daughters from the previous marriage, Bella, and Gigi Hadid. Besides her current love life, Shiva was previously a married woman, but the details of her former husband have been kept under the wraps.

What Does Shiva do for Living?

Shiva Safai wanted to pursue a career in modeling since her early days. Her dream eventually manifested after she moved to Los Angeles at nineteen and got chance to appear on the hit reality show, ‘E! Second Wives Club’

She later featured as a guest on ‘The Real Housewives of Beverly Hills.’ Her appearance on the show helped her gain more fame and limelight, and also made her popular on the social media pages. Shiva has earned more than 700k followers on her Instagram page.

How Much is Shiva’s Worth?

After the engagement with the real estate mogul Mohammed Hadid, the living style of Shiva has drastically changed. She lives a lavish lifestyle and doesn’t seem to focus on any particular job to earn a living. Speaking of her finances, Shiva’s individual net worth is estimated to be around $10 Million, while her fiancé’s value is about $400 Million.

Shiva Safai celebrates her birthday on August 12. She was born in the year 1980 and was raised by her parents in Iran as per wiki. Shiva has got two brothers Shahin and Shayan Safai as her siblings. She holds an American nationality, and her ethnicity is of Iranian-American. Shiva has got the looks of a model, and her standing height enhances her temperament as a reality star.