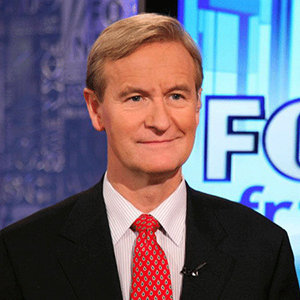 American network-television personality Steve Doocy is a prolific co-host for Fox News. He has been hosting network's morning show, Fox & Friends. He previously gained recognition as a co-host of Wake Up America on NBC cable.

Steve also worked as the news anchor for WCBS-TV. He was an acclaimed reporter on Dick Clark's New Year's Rockin' Eve on ABC-TV. He was the man to launch Fox News Channel's New Year's Eve special, All American New Year alongside co-hosts Gretchen Carlson and Brian Kilmeade.

What's Net Worth Of Steve Doocy?

Steve Doocy, age 61, has a net worth of $2 Million. He received his wealth from his career as a network-television personality. He accumulates $500 Thousand per year salary from his job as a co-host for the network's morning show, Fox & Friends, on Fox News.

Before joining Fox, Steve generated income as a co-host of Wake Up America on NBC cable. He also made money anchoring the morning newscast on CBS-TV's flagship station, WCBS-TV. As per Glass Door, the average estimated salary of news anchor on WCBS-TV is $158,549.

The Emmy Award winner Steve generated revenue as a feature reporter for WRC, in Washington, D.C after his WCBS stint. He later increased his net worth working as the Times Square reporter on Dick Clark's New Year's Rockin' Eve on ABC-TV.

Doocy has been working at Fox since 1996 hosting network's morning show, Fox & Friends. He co-hosts the show with the likes of Ainsley Earhardt and Brian Kilmeade. American commentator Gretchen Carlson is his former co-host. She was reportedly paid $20 million for the settlement from Fox News after she accused CEO and chairman Roger Ailes of sexual harassment.

On 30 July 2018, Steve revealed an official cover of his cookbook "The HAPPY COOKBOOK" via Instagram. He and his wife, Kathy had been working for the book for 30 years. The book is set to release in October. In the Instagram post, he also revealed that fans could pre-order the book in Harper Collins Publishers for $29.99.

Steve Doocy met TV host Kathy Gerrity while working at WRC-TV in Washington D.C. The couple then fell for each other. Steve and his former model girlfriend Kathy married in 1986.

After one year of marriage in 1987, Steve with his wife welcomed their first son named Peter Doocy. The two moved from Washington D.C. to New York when Peter was just two years old.

Steve is also blessed with two more daughters named Mary Doocy and Sally Doocy, but the actual date when they were born is unknown. Steve Doocy has an attachment to his son Peter. Steve shared a photo of him with a son attending WHCD on 1 May 2016. Steve's son Peter Doocy is also a reporter for Fox News as like his father. He completed his graduation from The Villanova and had been working as a general assignment reporter for the network since 2009.

Similarly, Steve's daughters Sally Doocy is currently working as a sales planner at Fox News, and Mary Doccy has been working as a counselor or the House Oversight Committee since May 2016.

Steve adores his kids very much. Recently on 31 July 2018, Steve wished his daughter Sally on her 25th birthday posting photo of his daughter with a birthday cake on her hand. Similarly, in July 2018, he took his kids in a concert of Taylor shift and even uploaded a video on Facebook, where he and his two daughters were enjoying the concert.

On occasion of father's Day 2018, his son surprised him with pre-Father's Day visit and a gift. In June 2018, Haute Living caught up with them and had a short interview. In the interview, Peter mentioned his father as his coach. He told that his father was his baseball coach during his middle school. Since Peter started working with his dad, his dad always has been by his side to make sure he is in the best position to do well.

As of now, Steve has great bonding with his wife and children, which eliminates the rumor of his divorce with a wife.

Born on 19 October 1956, Steve Doocy was born as a Stephen James Doocy in Algona, Iowa; the U.S. As per wiki, Steve is of mixed ethnicity (Irish, English, German, and Swedish descent). Steve while comparing his height with his wife, he is few inches taller than Kathy Gerrity. He is a son of Anne (Sharp) and James Edward Doocy. His father passed away on 8 February 2014.