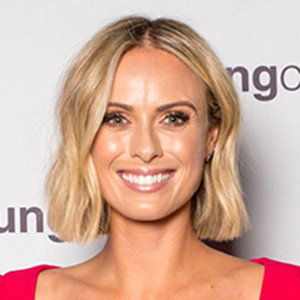 Sylvia Jeffreys is known for her works in the journalism field. She is also a news presenter of ‘Today.’ Known as one of the hot presenters, she has been captivating many viewers from her sexy slim feet and graceful presenting skills. Sylvia had the passion for journalism from her early age. Sylvia's constant career efforts and outstanding performance has paid her a fair price which includes her substantial net worth and fortunes along with career success.

Sylvia's Net Worth And Career

Sylvia Jeffreys accumulates her net worth from the professional career as a media and networking personality. She serves as a news presenter on the Nine Network's Today. As per PayScale, the base salary of the Television presenter is $61,463 per year which means that she has smashed the colossal amount of wealth and fortunes from her career in thousands and more amount.

Jeffreys started her journalism career from 2005 where she first worked as a script assistant in ‘Nine Network.’ As she had gained the production office skills in University, she became a lot easier for her to work in the newsroom. She got an opportunity to cover the lifestyle stories in 2008 for the program ‘Extra’ from which she became known to the viewers. But she returned to the newsroom in 2009.

In her 11 years career in ‘Nine Network,’ she has worked in the different position within the network. She got a chance to appear on-screen in 2011 when she was offered to be the weekend weather presenter for ‘Nine News Brisbane.’ There, she provided herself to come in the limelight as she also reported numerous stories as well. Some of the major stories that she covered for the network are ‘Central Queensland Flood’ which covered the most areas of Brisbane, Grantham and Ipswich and ‘Cyclone Yasi’ where she reported about the damages caused by it.

She decided to shift from Brisbane to Sydney in 2012. She joined ‘Today’ as New South Wales reporter. Though she left the show in 2013, she made her mark to the viewers. Later in 2013, Jeffreys worked as both fill in presenter and reporter for ‘Nine Network.’ In this period, she worked in different shows such as ‘Weekend Today,’ ‘Today,’ ‘Nine Afternoon News’ and ‘Nine Morning News.’ After one year of leaving ‘Today,’ she joined the program again in 2014.

Just like her professional life, her personal life has also picked up its height. Sylvia Jeffreys relished her love life with her boyfriend, Peter Stefanovic, who is also an Australian journalist. They dated several months in 2016 after they first met at Channel 9 as they were hosting the weekend Today show over the Christmas period. After their first meet, they fell for each other and started dating. Later, Sylvia got engaged with Peter in 2016, and after a year of their engagement, the duo tied their nuptial knot in April 2017 in New South Wales, which was attended by large numbers of their friends and relatives. As they were on the happy voyage of their married life, the rumors about Sylvia's pregnancy started to surface on the media with lots of gossips and talks regarding the pictures shared in social media. However, the talented journalist and her husband has not revealed any information regarding the pregnancy but hope they will add a new member in their family soon. As she is entangled with her family, she is not lesbian.

Born in 1986, in Brisbane, Australia, Sylvia Jeffreys celebrates her birthday on 23 April. She belongs to the white ethnicity and holds an Australian Nationality. She attended the University of Queensland and graduated with the degree in Journalism.