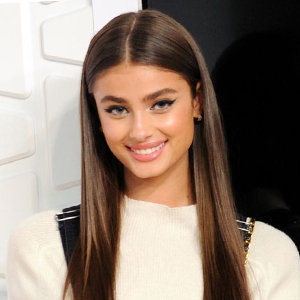 American model Taylor Hill is best known as the Victoria’s Secret Model since 2015. She has worked for Swedish Retail company Hennes & Mauritz AB H&M back in 2014 and walked the Victoria's Secret Fashion Show for the first time in 2014. The model was voted as the most promising model by Couturesque's readers in 2015. She won the Model of the Year award in August 2015.

How Much Is Taylor Hill’s Net Worth?

The 22-year-model has a huge net worth of $5 million from her modeling career since 2013. The Forbes enlisted Taylor on the number 17 spot as the world top-earning models as she reportedly bagged $4 million in 2015 and 2016.

She has mustered high earnings signing deals with fashion brands like Lancome, Topshop, Miu Miu, Jimmy Choo and Michael Kors watches. Taylor added a significant portion of revenues for hosting an event for Victoria's Secret PINK in 2015. She became Victoria's, Secret Angel in 2015.

Taylor commenced her modeling career in 2013 when she was featured in the Italian clothing brand, Intimissimi. She was discovered at the age of 14 by a photographer named Jim Jordan on a farm in Colorado.

The Victoria's Secret model is dating model Michael Stephen Shank since 2015. Her boyfriend, Michael has appeared in The Bold and the Beautiful as a model.

They often flaunt their pictures on social media. On 7 March 2017, her partner Instagrammed a photo of Taylor and wished her on her birthday.

The couple has been part of many fashion shows and after-party events. They attended Golden Globes event in January 2018. The couple was also spotted at Matsuhisa restaurant in Beverly Hills having a sushi dinner on 28 February 2018.

Taylor is the daughter of David Glenn Hill and Jennifer Rea (Tate). In her family, she has three siblings; two sisters named Logan Rae and Mackinley Hill and a brother, Chase Hill. Mackinley and Chase are also professional models.

The model has snapped a throwback picture along with her family to wish her dad on Father’s Day on 18 June 2018. Taylor thanked her father in the Instagram post for bringing her and her best friend, siblings to this world. She describes her father as the best dad. Taylor also credited her dad for giving her a great sense of humor.

She completed her high school graduation from Pomona High School in Arvada, Colorado in 2013, at the age 16.