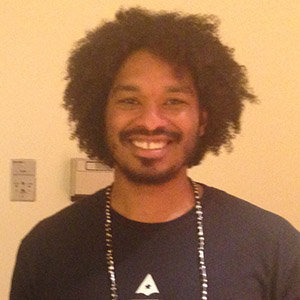 Directors are an expert human in term of decoding and interacting the stories with reality. Terence Nance is pro in case of utilizing the analytical mind to produce stories and metaphors.

Artist and film-maker Terence Nance is popular for creating American late-night sketch comedy series Random Acts of Flyness. The TV series premiered on 4 August 2018. He is also known for directing the experimental film, An Oversimplification of Her Beauty. The 36-year-old moviemaker was awarded a Guggenheim Fellowship in 2014.

Terence Nance is dating actor and producer Namik Minter. The two attended the IFP's 22nd Annual Gotham Independent Film Awards organized on 26 November 2012. Later in 2013, he included her in the movie An Oversimplification of Her Beauty, which Terence directed himself.

With the blending of his real-life girlfriend and multiple styles of animation with a few fictional stories, Terence created the experimental movie, starring himself and his girlfriend, Namik Minter.

As shown in the movie, Terence fell for Namik and wanted to date with her. Luckily, a young lady, Namik told him that she was coming to her company and planned for a date. Eventually, she canceled a plan and told him that she wouldn't be arriving at Terence house. Then Terence created a film to impress Namik and show her the love he has for her. Meanwhile, Terence revealed about his relationship with Namik and reason behind directing a movie in an interview with Interview Magazine in April 2013. As said in the interview, Terence gushed that his relationship with Namik is 100% real but, the story he created in the movie is only real to the extent of his remembrance and the time constraint of an hour and a half. Also, he preferred the film to be experienced between real and fiction, but more than that he preferred to call it a fantasy.

As of now, Terence Nance and his girlfriend are in a blissful relationship with each other.

Terence Nance grew up along with his three siblings named Nelson Bandela Nance, Djore Nance, and Classi Nance. His mother is an actress and acting coach whereas his father is a local news cameraman and “music aesthete.”

As per the Guardian Magazine, Terence's father is different than other parents. He loves Hip-hop music and even used to buy DJ turntable and tried to break it down. Meanwhile, he was a curator of music despite being a DJ.

Terence's siblings also adore him very much and take him as an inspiration. On occasion of his birthday on 10 February 2017, his one of the brother named Nelson Bandela Nance wished him via Twitter and flaunted his love toward a big brother, Terence. His brother in his tweet mentioned that Terence truly inspired him.

Born in 1982 in  Dallas, Texas, the U.S, Terence Nance celebrates his birthday every year on the 10th of February. He stands at a tall height and belongs to Afro-American ethnicity.

Facts To Know About Terence Nance