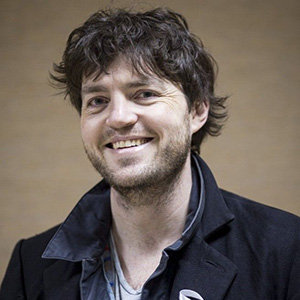 British actor Tom Burke charmed the globe with his work on the mixture of the BBC series that always has been able to garner a massive fanbase. He starred on BBC's The Musketeers, War & Peace, and is currently gaining notoriety from crime drama series Strike.

Along with his acting credits, Tom is active on theatre productions and appeared in the plays like Romeo and Juliet; Macbeth; I'll Be The Devil; Reasons to be Happy, and Deep Blue Sea. In the year 2019, Tom debuted as Johannes Rosmer in Rosmersholm that got premiered in Duke of York's Theatre.

British actor Tom has been mesmerizing his fans with his role as Cormoran Strike on BBC One's Strike. Talking about his on-screen character, English actress, Holliday Grainger portrays the role of Tom's on-screen girlfriend as Robin.

Tom as Cormoran paired alongside his detective partner Robin Ellacott, and besides their working relationship, they had a romantic spark. Robin was a girlfriend of Matthew that created a massive confusion to the fans of Strike. Moreover, she was a soon-to-be-married lady, but Strike's blossoming partnership created a twist in the plot. As for Tom, he once mentioned in his February 2018 interview with Tatter that he indeed is dating with his girlfriend who is in the acting industry. But the actor did not disclose who the actress was.

Tom is yet to get married and is probably looking forward to making his mysterious girlfriend his future wife.

Tom has been garnering the net worth from his acting career. He appeared in 2013 film Only God Forgives as Billy that grossed a box office of $10.6 million in a production budget of $4.8 million, as per Box Office Mojo.

Apart from that, he played in I Want Candy, Cleanskin, The Souvenir, and The Musketeers. Currently, Tom is starring on BBC One's Strike as Cormoran Strike since 2017.

Born as Tom Liam Benedict Burke on 30 June 1981, Tom's hometown is in Kent, England. During his birth, he had an orofacial cleft, and till now, the actor has a vertical scar on his lip. His family has a background in the entertainment industry. His parents Anna Calder-Marshall and David Burke are also actors.

Tom, who had dyslexia during his childhood, left school and attended the Royal Academy of Dramatic Art (RADA) at the age of 18. His height is 1.83 m (6 feet) and holds British nationality. Tom's godfather was the late Alan Rickman.