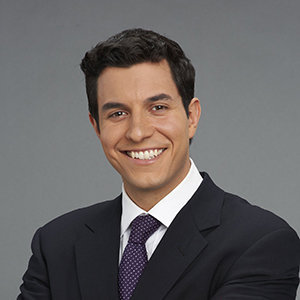 Tom Llamas is the name that belongs to the world of broadcasting and communication. Popular for the television show, 'ABC World News Tonight,' the familiar face in television, Tom Llamas, has been awarded Emmy and Edward awards for the contribution for his outstanding work in news coverage. Being a public figure, Tom is vocal about his professional as well as personal life with his wife and children.

Tom Llamas is an American Journalist and the anchor serving for the ABC broadcast television network in New York. Being the weekend anchor of the ABC Network, Tom joined his current working channel in September 2014. Tom Llamas replaced the correspondent David Muir as a host in ‘ABC World News Tonight.’

Since the year 2000, Tom has been actively following his interest in the broadcasting world. Starting the career at the NBC, the Journalist worked for MSNBC, NBC and WNBC News Network.

How Much Is Tom Llamas’s Net Worth?

The career that has expanded a decade is an obvious factor which can help us speculate Tom's salary. In this context, his earnings might be a mouth-watering one. Because of the inadequate information of his estimated income, it is tough in knowing the figural numbers of his net worth.

But more than his earnings, people remember Tom for his several awards and recognition that includes Emmy Award for Best Anchor. Similarly, a regional Edward R. Murrow Award was felicitated to him for the coverage of Hurricane Sandy reporting for WNBC-TV

Tom has been spending a decade old relationship with his wife, Jennifer Llamas.  Although the marriage details of the pair are under the wraps, one of their Instagram pictures gives a clear idea to the readers that they got married on June 11, in the year 2006. Tom, who is active in social networking sites, shared the picture with his wife on his 10th wedding anniversary. Tom wrote,

Every single day my life gets better because of this woman and this moment 10 years ago today. #happyanniversary Tom and Jennifer Llamas at their wedding back in 2006 (Photo Credit: Instagram)

Number Of Kids In The Family

The couple is altogether blessed with three kids; two daughters, Malena and Juliette and the youngest son whose name confined. The eldest child, Malena was born in the spring of 2012 whereas Juliette was born in the year 2015. The youngest child in the family was born on 13 October 2017. Since the reporter doesn't hesitate to talk about his personal life, he has shared the many pictures of his family on social media. Talking about Tom's sexual orientation, he is straight. Being the father of the three beautiful children, Tom can't be assumed as gay.

Despite the hectic working schedules, Tom has got enough time for a workout. The body that the news reporter possesses is like an athlete although there is not a single image of him going shirtless.

As per wiki, Tom Llamas was born on July 2, 1979, and was raised in Miami, Florida. Tom has received bachelor’s degrees in Broadcast Journalism and Drama and Speech from Loyola University in New Orleans, Louisiana. Tom is a Cuban American and belongs to mixed ethnicity. Due to insufficient information, it is hard in knowing the proper name and family background of this correspondent.