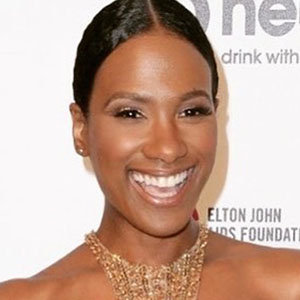 Orange Is the New Black(OITNB) star, Vicky Jeudy got involved in the entertainment industry for the first time as Top 25 semi-finalist in the Miss New York competition and took home the title of Miss Photogenic during her college years.

During her early years in the industry, she started doing indie films and off-Broadway shows. She states that If she weren’t able to make a name in the film industry, she would have been a nutritionist.

Besides that, Jeudy is also certified as a kickboxing and aerobics instructor. Apart from the entertainment business, she is an activist and Ambassador of J/P HRO.

Vicky celebrates her birthday on 23 January. Born and raised in Queens, New York, USA, she is a graduate from St. John’s Preparatory School in Astoria. On pursue higher education, she got a Bachelors's Degree in Arts of theatre studies at the University of New York.

Jeudy's parents were from Port-au-Prince so, she belongs to Haitian-American ethnicity. Vicky's parents were not supportive of her decision to pursue a career in the acting industry. They were totally against it and even assumed it was just a phase that Vicky was going through before she comes back to her senses. Vicky poses for a photo with her father (February 2018)(Source: Twitter)

Unfortunately, Vicky's mother is no more alive now; she wished for her to be a physical therapist as she was already certified as a fitness instructor. In the family, the 32-years-old actress has a little brother. Even though there aren't many details on her family background, she often features them in her social media.

On her physical attributes, she stands at the height of 1.7m (5 feet 7 inches) with a modest build and weight.

Vicky shares a fair share of romantic moments as Janae Watson with her on-screen lover Donte in OITNB. On the screen, she gets into trouble after she and her boyfriend robbed a store. Sher is left behind and get caught after her boyfriend runs away from the police. That's how a sweet track-star Janae ends up in prison and turns into an aggressive badass.

However, Vicky’s off-screen love life hasn’t been wholly explored like her tragic on-screen romance. She barely spills beans regarding her personal life. The OITNB star might be cruising a single life focussing on her career or secretly dating her boyfriend. Although her relationship status is obscure at the moment, she has never been reported of getting engaged or married to any lady.

Vicky debuted in the television world from an episode of Law & Order in 2014 and never looked back. Down her flourishing career in the industry, she starred in movies and TV series like Bottom Feeder, Armstrong, Romeo and Juliet in Harlem, Shake, Kids, and Addiction.

There is no doubt that American actress career in the entertainment industry has attracted immense fame and wealth in her life. However, as of now,2019, her net worth is yet to be reviewed.

Note: The expected salary of an actress in Los Angeles, California, is evaluated to be approximately $21k-$431k. But, Vicky's magnificent performance and prestige inevitably stretch those margins to some level.